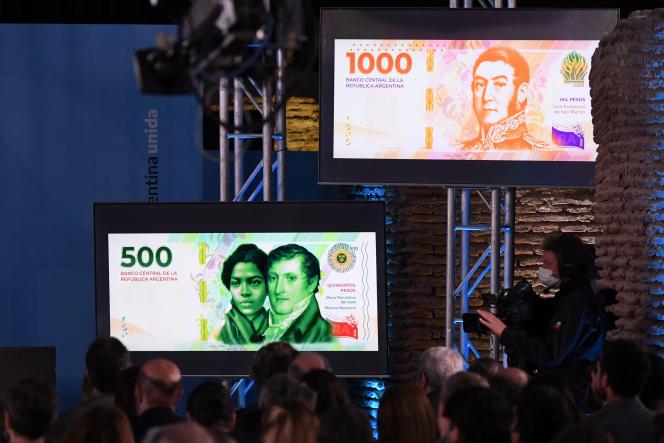 Three men. Three women. The central bank and Argentine President Alberto Fernandez (center left) presented “the new banknote family”, joint, Monday, May 23. Denominations of 100, 200, 500 and 1,000 pesos (from 78 cents to 7.80 euros, at the official rate), all bearing the effigy of great figures in the country’s history. “Argentina recovers its heroines and historical heroes”, proclaims the central bank.

Among them, Maria Remedios del Valle, an independence fighter of African origin, makes visible the partly African roots of the Argentine population, while the prevailing narrative tends to ignore them. In a range of purples, Eva Peron makes a comeback on 100 peso notes. Died in 1952, the one who was the wife of President Juan Domingo Peron (1946-1955, then 1973-1974) – founder of a political current with social accents – remains a great reference for the Argentinian left. Her smile is already sometimes crumpled in the bottom of the pockets: she appeared in 2012 on the 100 peso bills, during the second term of Cristina Fernandez de Kirchner, currently vice-president.

These impressions are not trivial. “Some want to erase history, they want us to forget (…). Today we recover our memory,” President Alberto Fernandez said Monday, May 23. The criticism addressed to his predecessor, Mauricio Macri (2015-2019), is crystal clear. In 2016, the center-right president also launched new versions. Jaguar, whale, condor: local animals were in the spotlight. “A new way to raise awareness of environmental protection,” argued the central bank at the time. Wildlife, free from the political charge of Eva Peron, also had to make everyone agree. By interposed birds and historical figures, it is thus the political, binary and powerful cleavage in Argentina, which interferes in the wallet of the population.

“The government is making a choice in the direction of cleavage and with a high economic cost [that of printing]”, criticized Federico Sturzenegger, president of the central bank during the mandate of Mauricio Macri, who had at the time decided to put into circulation higher face values, in order to adapt to inflation. A measure rejected by the current government – ​​despite a 58% price surge over one year – which has not put new zeros alongside the heroes. Argentinians, whose purses swell with weakening notes, are already saying the value they place on the smallest denominations: simple scrap paper, on which notes or additions are often scribbled.