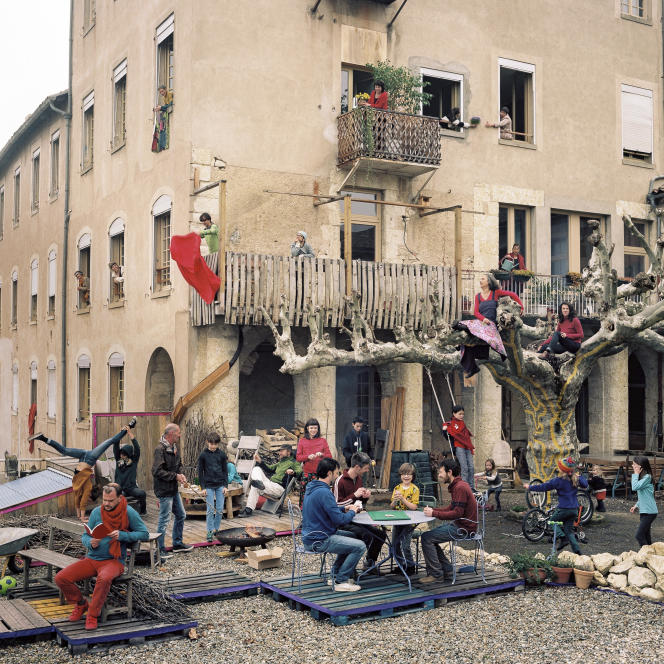 “We’re far from perfect,” began the voice on the phone. The man wanted to avoid any misunderstanding. They had moments of doubt, financial difficulties. They sometimes argued, too. For all these reasons, and because they are not settled in a hamlet among the goats either, but in one of those towns where the shops are closing, the trains no longer stop, and where the young leaving, meeting the inhabitants of La Convention, a former convent in the center of Auch, in the Gers, made sense.

Twelve families, including a dozen children and three architects, occupy an old building – six levels, two large south-facing terraces, a view of the lower town – completely renovated by them and with a functioning that ranks them among the few thousand of participatory housing identified in France. A minority, but these different ways of housing inspire urban planners and architects, who see it as a way to save buildings, recycle places, and pool goods and resources.

They weren’t aware of any of this at first. If certain groups are formed before finding a place, in Auch, it is the place that federated. Frédéric and Sylvie Rouziès, a couple with two children, were looking for a bigger house where everyone would have their own bedroom. But in the region, when it’s big, it’s for sale, and they don’t want to own it. They think about looking with a friend, father of three children, until the day when Sylvie gets more annoyed than usual: “But you really don’t have anything bigger? The real estate agent takes her at her word, he has “something really big.”

“There is something to do”

Friends are visiting that weekend. Here they are, just curious to visit this place with incredible volumes, it is said. The convent housed penitents in the 17th century. The chapel is from the period. A religious school took over, then the Labor Exchange and, finally, a medical-educational institute, which the maze of stairs eventually dislodged. Promoters wanted to transform it into a luxury hotel but broke their teeth on the local urban plan. The property, on sale for six years, has lost its value. “Three hundred thousand euros, notary fees included,” announces the real estate agent. “There is something to do,” slips an architect friend.

A year and a half elapses between this visit and the signing at the notary. A first meeting is held. Around the table, there is Valérie Tachon, alone with a child, who is interested in a collective project. She knows Jean-Marc Jourdain, architect, who quickly confirms that it is possible. The idea makes its way, the circle widens. Not everyone knows each other. Seven of them end up ordering a feasibility study. The place is in one piece, you have to subdivide it, have an idea of ​​​​the sharing of spaces, quantify the common works.

The meetings follow one another every ten days, the emails accumulate, the fatigue too. “There was sometimes frustration because we weren’t moving at the same pace. It took up a lot of space in our life, ”admits Emmanuel Veneau, the father of the three children. “We also had no example to draw inspiration from”, adds Frédéric, “society is made for individual property”. Not all lots are allocated at the time of the promise of sale. “We had to find people in three months. We may have gone too fast, ”slips Valérie. The signing day at the notary is an event in itself. They disembark at thirty, children on their knees, others still at the breast. “It was joyful, crazy, a first outcome. We didn’t know where we were going,” they recall.

The site started in October 2014, Frédéric and Sylvie moved in the spring, the first, in their 145 m2 bought 60,000 euros, and 110,000 euros of work. “Without this project, no one would have access to property,” they explain. 80% of them were eligible for aid from the National Housing Agency, which finances the renovation of homes for the most modest. They get 30,000 euros with which they change the windows, install a stove. Unlike others, they are anything but manual. Their library, made of floor scraps, is their great pride.

A rule governs the life of the collective: one Sunday a month, they have lunch together and devote two to three hours to common work. The rest, such as the loan of apartments during the holidays to accommodate friends, a family of undocumented migrants, happened naturally. During confinement, a daily meeting – one meter away – is organized on the terrace. Kids who grow up thinking it’s okay to have a common gym, yard, and freezer—”where we put the ice cream”—do their homework together. “I live with other people, but I have my house,” they try to convey to the outside.

And then there was Venice. The architect friend present at the first visit is Nicolas Delon, from the Encore bonheur collective, French ambassador to the Venice Architecture Biennale in 2018. He chooses to present “pioneer places” where the collective takes precedence . The Convention is on his list. They rent a bus, leave at 35, the children in the back on mattresses. “Venice allowed us to take a step back, to not just see what was wrong,” says Frédéric Rouziès. “That’s where we felt part of a movement,” adds Sylvie.

A first batch was sold, the most emblematic, because in the middle of all. On a charter that has nothing legal, a few principles have been listed: no capital gains, prices are indexed to inflation, no Airbnb either. “The idea is not to value individually what has been created by the collective,” explains Emmanuel Veneau. Buyers must also meet the group. “We tell them what it means to live here, the commitment that entails. You have to be clear with the idea of ​​giving time to collective things. »

Only one does not participate in anything, did not come to Venice either. “It questioned us about our ability to integrate, but we have to accept that not everything works,” admits Frédéric Rouziès. Stories like that “neighbor upstairs” collectives abound. Some separate. The strongest have a project in common. At La Convention, they want to open up to the outside world. The gymnasium has already been loaned to choirs and associations. In mid-May, they released two apartments to house 17 actors and technicians who were looking for a base in the city center. But the chapel where the raclette machine, a sledge, camping equipment and an iron were stored, has more potential. A “commission” is working on it.

The idea of ​​car sharing, on the other hand, is at a standstill. Many ride bicycles, none are really attached to their car, but knowing that they can use it at any time still takes over. Pooling continues informally, on Telegram. As for the idea of ​​renaming the place, as everything is decided by consensus and they have never managed to agree, La Convention risks keeping its name for a while yet.