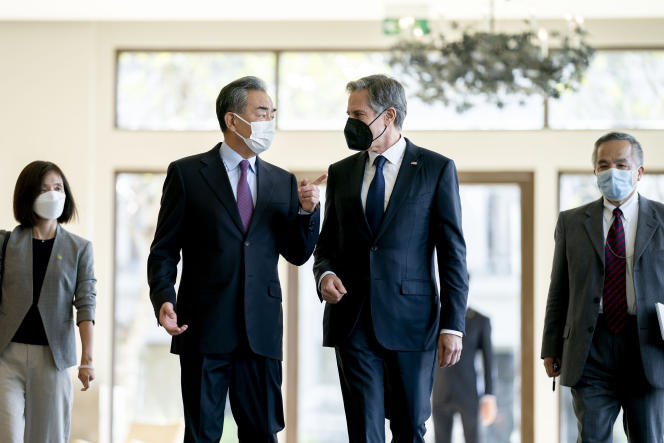 “Helpful, frank and constructive” discussions, according to US Secretary of State Antony Blinken. The head of American diplomacy spoke with his Chinese counterpart, Wang Yi, for nearly five hours, the day after a meeting of the heads of diplomacy of the Group of Twenty (G20), in Bali, Indonesia. This is their first meeting since October.

“Despite the complexity of our relationship, I can say with some confidence that our delegations found today’s discussions to be helpful, candid and constructive,” Mr. Blinken said.

“I have expressed the deep concerns of the United States over Beijing’s increasingly provocative rhetoric and activities toward Taiwan and the vital importance of maintaining peace and stability in the Straits. from Taiwan,” Mr. Blinken added, however. The United States is concerned about Beijing’s increased military pressure in recent years against Taiwan, a democratic island that China considers part of its territory and has vowed to take back one day.

Mr. Blinken also asked his Chinese counterpart to distance himself from Moscow and condemn Russian “aggression” against Ukraine. “This is truly the time when we all need to stand up, as one G20 country after another has done, to condemn the aggression and demand, among other things, that Russia allow access to food blocked in Ukraine,” he pleaded.

The US Secretary of State says he saw “no signs” of cooperation from Russia. The day before, Russian Foreign Minister Sergey Lavrov walked out of the meeting with his G20 counterparts after coming under a torrent of criticism over Russia’s invasion of Ukraine.

At the start of this morning of discussions followed by a working lunch, MM. Blinken and Wang played the appeasement card. “In a relationship as complex and important as the one between the United States and China, there are many things to discuss,” Blinken said, adding that he “looks forward to a productive and constructive conversation.” as he and Mr. Wang posed in front of American and Chinese flags at a hotel in Bali.

“China and the United States are two big countries, so it is necessary for the two countries to maintain normal exchanges,” Wang replied. “We must work together to ensure that this relationship continues to progress on the right track,” he added, calling for “mutual respect.”

The exchange between Messrs. Wang and Blinken must also prepare a videoconference meeting between the American and Chinese presidents in the coming weeks. Meetings between the two countries’ top defense, finance and national security officials have also taken place over the past two months.

News Editor - July 9, 2022 0
France is now accustomed to reality TV culinary competitions, whether in the pastry and bakery field ("Who will be the next great pastry chef?",...