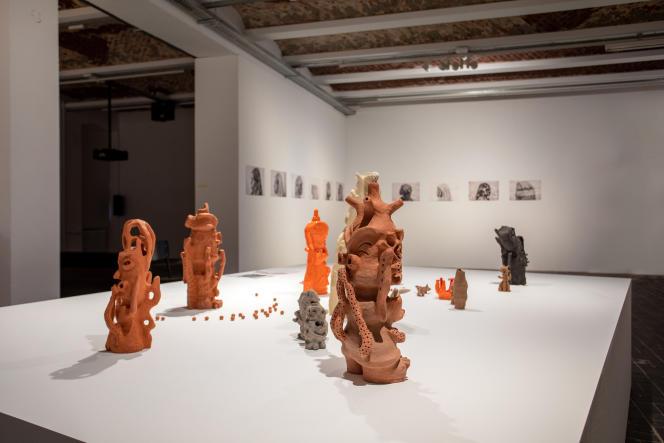 The twelfth Berlin Biennale is called Still Present. It could be a simple no-brainer: artists are present. But, as Kader Attia, artist himself and curator of the event, says, “being present here is not just about being seen. It is to take a position on essential subjects. Why, if not one more exposure, especially in the current situation? Still Present means Still Alive! : still alive”. Still at War, always at war, would have been a more appropriate title for this Biennale made up of incisive questions, stories that hurt, painful details.

Kader Attia sets out the design thus: “Colonialism, slavery, imperialism are the wounds from which our time suffers, because they have not been healed. It is essential to tackle it so that our societies can live together, even if some evils cannot be repaired. Art is needed more than ever today, to share a new vision in a world that was built on denials and crimes, a vision that humanity must make its own. Rewriting the history of the 20th century from the point of view of the suffering inflicted on the vanquished by the victors is the raison d’être of the Biennale.

For this purpose, it brings together about one hundred and fifty artists, the presence of collectives making the approximate figure. Whatever their age, gender, mode of expression and their particular subject, this desire for investigation and memory is their common point. Many have others, such as being born far from the Western world or being the child of immigrant parents, being ignored by the international market which does not like political subjects and, as a result, being little exposed outside of circumstances such as this one. To its immense intellectual interest, the Biennale thus adds another, just as precious: to multiply discoveries and revelations. If we find Clément Cogitore or Mathieu Pernot, on the French side, India, Vietnam and the Middle East are much more present here than they usually are in events of this type.

Before we get to them, some practical details. The Biennale is divided into five locations. It cannot be visited in less than two days and requires endurance: you walk a lot, you climb a lot of stairs and the use of the metro is recommended. Four of these places are artistic by destination: the KW Institute for Contemporary Art, the two buildings of the Akademie der Künste – art academy – and the Hamburger Bahnhof, museum of contemporary art in Berlin. The fifth is less expected: the former buildings of the Stasi – the secret police of the communist GDR – which have become part of the museum of this police force and its craziness of filing and filing. Placing work there, which deals with the current hypertrophy of algorithmic surveillance and manipulation of citizens, makes sense: the present copies the past, plus the power of the digital.

Many artists are present in several places, a way of creating resonance and ensuring general consistency. Another specificity: historical sections are inserted in the route. These are collections of journals, images or exemplary works. To raise the question of primitivism and appropriation, four canvases by painters from the Die Brücke group, Emil Nolde (1867-1956) and Karl Schmidt-Rottluff (1884-1976) depicting African or Oceanian statues or masks are thus associated to a collection of Christs, sculpted in Congo or New Guinea, in native styles, hybridizations produced in a colonial situation. Their confrontation is demonstrative.

To attempt an inventory is obviously impossible because of the number of works. They could be classified by themes, historical periods or geographical areas. But it is also relevant to look at them according to their visual languages: there are, on the one hand, those that fall under a documentary style; on the other, those who proceed by gestures and symbolic figures.

Documentaries are based on archives, testimonies, plans or computer graphics and are most often explained by a voiceover. Thus the Forensic Architecture group describes the repressive or murderous uses that many States make of all kinds of more or less lethal gases – chemistry in the service of war today as during the First World War – and analyzes the bombardment by the Russian army of the kyiv television antenna, located near the Babi Yar memorial, where more than 30,000 Jews were executed by the Nazis on September 29 and 30, 1941.

Using the same modus operandi, Ammar Bouras returns to the French nuclear tests in southern Algeria and the “Beryl accident”: a release of highly radioactive dust in the open air in 1962 and its fatal consequences. Imani Jacqueline Brown details the overwhelming devastation of the oil industry on the Louisiana coastline. Dana Levy shows with maps, photos and interviews, the effects of Israeli settlements in what was once Palestinian territory. Omer Fast interviews those responsible for the remote surveillance deployed in the streets of London. In all these cases, the question of evidence is essential: everything must be sourced and proven.

Others go from the bare document to fictions where reality is replayed. Tuan Andrew Nguyen stages, on four screens that respond to each other, the destinies of children, born to Senegalese fathers fighting in the French army during the Indochina war, and Vietnamese mothers: The Specter of Ancestors Becoming is a work all the more powerful in that it avoids pathos and the spectacular – a quality lacking in other video installations overloaded with superfluous technical effects. Contrary to these excesses of rhetoric, the Egyptian Amal Kenawy filmed in 2010, two years before her death, with ruthless sobriety, her performance “The Silence of the Lambs”: crawling along the sidewalks of Cairo group of mute women and men, like animals going to the slaughterhouse, and film the ulcerated reactions of passers-by who accused him of harming the dignity of Egypt, which moreover proved that they had understood the fable.

So we come to symbolic forms. There are those who take news images as their raw material to accentuate their strength to the point of unbearability. In 2013, Jean-Jacques Lebel took abject photographs of the abuse inflicted on Iraqi prisoners by American soldiers in the prison of Abu Ghraib, greatly enlarged them and arranged them in the form of a labyrinth. This installation places visitors so starkly before the reality of the horror that some turn around, as if, by refusing to see, they were erasing what happened. The same goes for the wall where Ariella Aïsha Azoulay methodically deploys the chronology and testimonies of the mass rapes committed by the Red Army in Berlin in 1945, on Stalin’s orders – a practice taken up in Ukraine, as we know.

There are those that combine several modes of expression. Sculpture, photo and performance for Deneth Piumakshi Veda Arachchige which recalls the “methods” of “surveys” practiced at the end of the 19th century in Ceylon: collection of skulls and anthropometric photos. She puts them in context, in the landscapes of what is now Sri Lanka, and raises the question of the restitution of human remains. Sculpture, drawing and weaving for Mayuri Chari whose installation “I Was not Created for Pleasure” is one of the most significant moments of the Biennale, with the subject of the status of women in India. Mayura Chari herself, because a female artist, was recently excluded from an exhibition in her country where she showed naked bodies: what is allowed for men would therefore not be allowed for women? Sculpture, drawing and found objects for Birender Yadav who thus speaks of the condition of workers in brickyards, still in India, slaves today.

Finally, there are those who use paint or assemblage: Mai Nguyen-Long models monstrous and vomiting deities in clay, which she colors with a bright orange, an allusion to the “agent orange , used during the Vietnam War, to destroy forests and rice fields; Dubréus Lhérisson adorns human skulls with sequins and pearls in memory of slavery and voodoo; Prabhakar Kamble inscribes in the sculptures of his “Utarand” series – bronze, wood, terracotta and blue pigment combined – the signs of the caste system that persists in India. Driss Ouadahi paints perfect geometric architectures empty of men, metaphors of the order maintained by force by the Algerian power. Christine Safatly makes reliquaries with fabrics, threads and nails. And Taysir Batniji only needs an hourglass to inscribe in a symbol the situation of the Palestinians, whose history seems condemned to an endless status quo.

If we want to verify that what the market and fashion are promoting today does not represent all current art, and that the latter has not only not completely renounced its political and ethical functions, but can also push them to a high degree of intensity, Berlin is the place to go. For a Biennial that will mark a milestone.