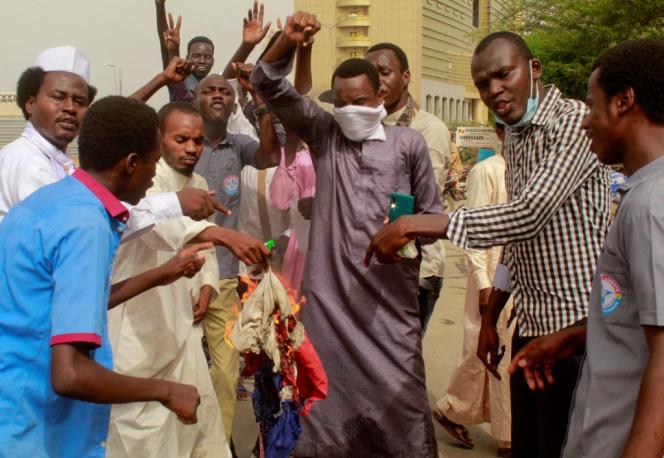 At least five people were arrested in Chad after violent demonstrations on Saturday against France, accused of supporting the ruling military junta, the opposition and a police official told AFP on Monday (May 16).

General Mahamat Idriss Déby Itno, son of President Idriss Déby Itno killed more than a year ago at the front against the rebels, immediately took over the reins of the country at the head of a group of fifteen generals, immediately dubbed by the international community, led by Paris, when other putschist officers suffered its wrath and sanctions elsewhere in Africa.

Seven service stations of the French oil group Total were vandalized and twelve police officers injured on Saturday in N’Djamena, according to a police official who requested anonymity and confirmed to AFP the arrest of “five officials of the demonstration, kept in the premises of the General Directorate of General Intelligence”.

“Five people were arrested by law enforcement on Saturday and they are not involved in the acts of vandalism. They are wrongly arrested,” said Max Loalngar, spokesman for the opposition platform Wakit Tamma, which initiated the call to protest.

On Monday, a demonstration of hundreds of high school students from the capital, marching to cries of “France out!” “, was quickly dispersed by tear gas, noted an AFP journalist. No one was arrested or injured, a police official told AFP.

Several opposition parties such as the Socialist Party Without Borders (PSF) and the political movement One Nation for All (UNPT), trade unions such as the Union of Trade Unions of Chad (UST) and certain rebel groups have called for the release of people arrested.

“What happened yesterday is extremely serious (…), people will answer for their actions”, retorted Sunday evening on national television the Minister of Communication, Abderamane Koulamallah.

“It’s time for this to stop. It is time that the false and unfounded allegations circulating on the redeployment of French forces inside the country also stop, ”said General Mahamat Déby, self-proclaimed transitional president, in a security meeting on Monday.

The junta had dissolved Parliament, dismissed the government and repealed the Constitution on the announcement, on April 20, 2021, of the death of Idriss Déby after having ruled with an iron fist for thirty years a country the scene of multiple rebellions. But she immediately promised “free and democratic elections” within eighteen months, after a “dialogue of national reconciliation”.

Since then, this forum, which must bring together all political and armed opposition, according to the Head of State, has not been able to start, the armed groups failing to reach an agreement with the junta in a “pre-dialogue” in Doha and the political opposition having withdrawn from this initiative.