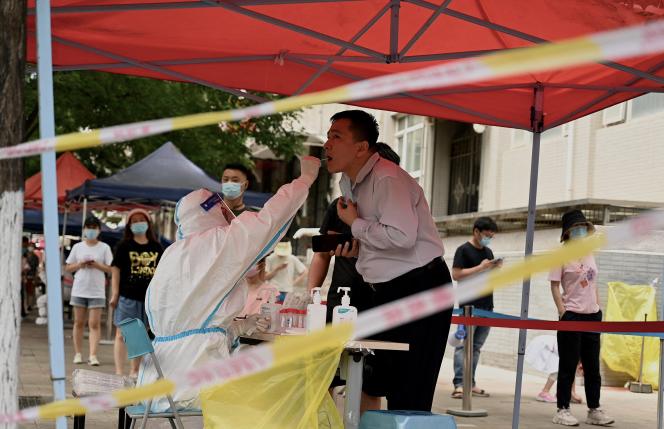 Two months after the start of a confinement which, according to the authorities, was to last only four days, the vast majority of the twenty-five million Shanghainese can leave their homes again, from Wednesday June 1. Likewise, the situation in Beijing, which has been in semi-lockdown since May 1, is gradually returning to normal. With the exception of schools that remain closed and coffee shops that only sell take-out, most businesses and social activities have reopened, and employees are no longer forced to telecommute.

“We do not believe that the zero Covid strategy is sustainable, given the current behavior and, according to our forecasts, future of the virus,” said Tedros Adhanom Ghebreyesus, director general of the World Health Organization, on May 10. China intends to demonstrate the opposite. “After winning the battle against the epidemic in Wuhan and regaining the pre-pandemic level of productivity and then being victorious in Shanghai…China is showing the world that it has achieved remarkable results in this ordeal and that it will be the same in the future,” trumpeted Li Junru, one of the theoreticians of the Chinese Communist Party in the June 1st Global Times daily. However, the victory is only partial. The city of Dandong (2.3 million inhabitants), on the border with North Korea, is officially confined.

Symbols of the continuation of this policy summed up by the triptych “test, trace, isolate”, in Beijing as in Shanghai, the thousands of temporary tents, where the population must be tested, are gradually being replaced by fitted out and permanent containers. . The “new normal” only partially resembles the “life before”. Pekingese must be tested every forty-eight hours, and Shanghainese every three days. Without a test, access to shops and public transport is prohibited. Whether you are vaccinated or not. At the slightest positive case, hundreds or even thousands of contact cases are sent to quarantine for a week, and the buildings they have frequented are confined. Living in an area considered “medium danger” (where cases have been recorded, but not exceeding fifty in the previous two weeks) – or high danger (more than fifty cases) makes it physically impossible to buy a train or plane ticket. In addition, there is a good chance that the city you want to go to will refuse you access or impose a quarantine on you.

This policy can only work if the tests are systematic. The city of Siping (3.3 million inhabitants, in the northeast of the country) announced on Tuesday May 31 that residents refusing to submit to it would be liable to ten days in prison and 70 euros in fines. ‘fine, before, it seems, to reverse. However, the tests must be reliable. In Shanghai and Beijing, several labs are suspected of falsely reporting “positive” tests in order for the testing policy to continue. Investigations are ongoing.

Confirmed by President Xi Jinping in early May, the zero Covid policy is not unanimous. Locked up for weeks on their campus, while classes take place online, several hundred students from Peking University demonstrated on May 24 to be able to return home. In Tianjin, other students, on the contrary, protested for classes to resume. In Shanghai, the confinement and the supply problems encountered in the first weeks also gave rise to quite unusual protest movements online or inside residences. A teacher in Shanghai, Benoît Vermander, one of the very last foreign Jesuits present in China, even broke the silence he imposed on himself until then to declare to Le Monde that the zero Covid policy constituted “a new stage in a strategy of entire party-state: establish a scientific management that allows continuous and evolving control over the population, calibrated according to the nature of the emergency. We must eliminate all that is “impure”: viruses as well as memes supposed to pollute the social atmosphere. It is an extreme form of social hygiene”.