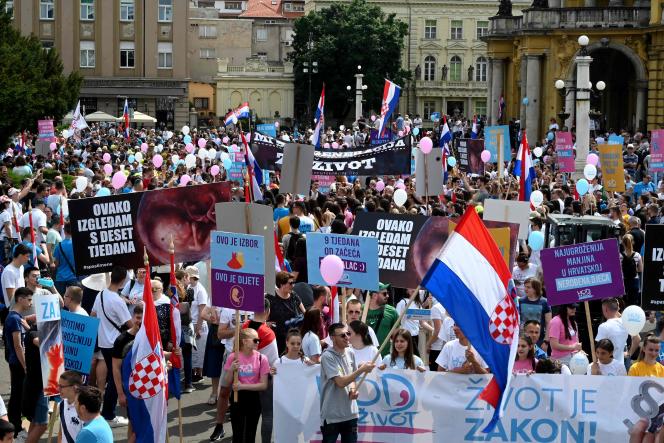 Several thousand people took part in a march against abortion in Zagreb on Saturday May 14. Two days earlier, Croatia experienced a mobilization of support for Mirela Cavajda, a woman who fought a difficult battle to obtain permission to have an abortion, due to the disease of her fetus.

Signs carried by demonstrators during this seventh annual “march for life” read, among other things, “Unborn children, the most threatened minority in Croatia” or “Unborn lives also matter”. Many parents accompanied by their children carrying balloons joined the march, organized by conservative associations.

“We support life, moral values, God-given values,” economist Maja Ivic, who took to the streets with her two children, told Agence France-Presse. “All human life, from conception to natural death, must be protected,” added Sinisa Kubatovic, 52. For him, “abortion should be allowed only if the pregnancy seriously threatens the woman’s life”. “Life is something more precious, life must be respected, life is the law,” Boris Ujevic, a gynecologist at a hospital in Zagreb, told the crowd.

Strong influence of the Catholic Church

Thousands of people demonstrated Thursday in Zagreb in favor of women’s right to health. The protest, organized under the slogan “Enough”, came the day after Health Minister Vili Beros announced that a “commission has authorized the termination of pregnancy” of Mirela Cavajda .

The mother-of-one was in her sixth month of pregnancy when doctors diagnosed her fetus with a brain tumor in April. Her request for an abortion was denied by four hospitals in Zagreb, but public pressure eventually forced the medical commission to give the go-ahead for the procedure on Wednesday.

On May 12, many protesters carried pink banners that read “Enough of clericalism in gynecological clinics”, “Enough of refusing to provide a medical procedure” or “Enough of jeopardizing women’s health”. The demonstration was organized in Zagreb and eight other cities in Croatia to show “solidarity with all women (…) whose right to health, guaranteed by the laws in Croatia, is violated daily”, the organizers had stressed. .

Right reaffirmed in 2017 by the Constitutional Court

In Croatia, conservative groups, supported by the Catholic Church, are urging the government to limit the right to abortion, authorized until the tenth week of pregnancy. After this period, an abortion can be performed if the health of the woman or the fetus is in serious danger, or in the event of rape or incest.

Nearly 90% of the 3.9 million Croats are Catholic, and the Church remains very influential in society. The right to abortion is increasingly put to the test, as many doctors refuse to perform voluntary terminations of pregnancy on the grounds of conscientious objection.

In 2017, the Constitutional Court of Croatia rejected an appeal by several conservative groups demanding a ban on abortion. It then also considered that the 1978 legislation was obsolete and asked for its revision. Human rights groups fear the changes could lead to more restrictions.