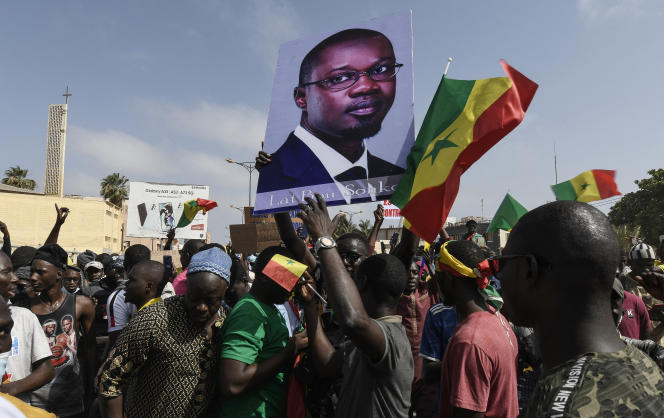 A show of force without overflow. On Wednesday, June 8, the Senegalese opposition gathered thousands of people in Dakar to protest against the rejection of its national list in the legislative elections of July 31 and to denounce the intention attributed to President Macky Sall to run for a third term in 2024.

The demonstration – at high risk after the violence of March 2021 which left a dozen dead – took place in a good-natured atmosphere according to AFP. The main Senegalese opponent, Ousmane Sonko, excluded from the upcoming ballot, was greeted with cheers by the crowd gathered on the Place de la Nation. “We are launching our pre-campaign today,” he said. Our only enemy is Macky Sall. »

The demonstrators denounced the decision taken on Friday by the Constitutional Council to confirm an order of the Ministry of the Interior deeming “inadmissible” the national list of holders of the main opposition coalition Yewwi Askan Wi, led by Ousmane Sonko, and which are associated with other leaders such as Aïda Mbodj and Cheikh Tidiane Youm. Reason: the coalition had twice invested the same candidate, Anta Touré, as incumbent and alternate.

For the opposition, at the origin of the appeal to the Elders, the Council’s verdict aims to eliminate Ousmane Sonko, who came third in the 2019 presidential election and declared candidate for that of 2024. A suspicion that is all the more significant as the Management General of Elections (DGE) is placed under the authority of the Minister of the Interior, Antoine Félix Diome, reputed to be close to President Macky Sall.

“Faced with an error, the judges chose to obey their appointee, the President of the Republic, to lead this cabal against the opposition. They could have rejected the problematic application and not the list. It is an iniquitous decision that torpedoes the law”, storm Déthié Fall, placed in seventh position on the national list and representative of the Yewwi Askan Wi coalition. Like the other rejected candidates, he will be replaced by his alternate.

On July 31, the Senegalese will elect 150 deputies according to a method that mixes proportional voting with national lists for 53 parliamentarians, and majority voting in the departments for 97 others. The diaspora elects 15 deputies.

The majority coalition, Benno Bokk Yakaar, which currently dominates the Assembly, has also been sanctioned by the Constitutional Council, but for a different reason. Its national list of holders has been validated, but not that of substitutes because it has not respected the rules of gender parity.

Despite this retortion, Benoît Sambou, representative of the ruling coalition, calls for the Council’s decision to be respected. “The right has been said. All actors have a duty to comply,” he defends. “Those who cry out for the instrumentalization of justice by the regime are manipulating public opinion. It was not the power that drew up the invalidated list. The opposition made mistakes. Why would she have the right to break the law and flout democracy? »

While Senegal is heading towards a presidential election in 2024, which is closely scrutinized because of the intentions attributed to the incumbent to run for a third term, the good performance of the legislative elections appears to be a test for the country. Some observers are concerned about the risk of strong political tensions following the exclusion of leading opposition figures.

“This decision poses a major legal problem. In the electoral law, we do not speak of a plurality of lists but of a single list, made up of incumbent and alternate candidates. What sense is there in maintaining alternates without their incumbents? asks Maurice Soudieck Dione, associate professor of political science at Gaston-Berger University in Saint-Louis. “The judicial institution supposed to regulate the political game is losing credibility and weakening Senegalese democracy”, warns the researcher.

To get out of this crisis, will the executive solicit the religious, traditional mediators in the political crises in Senegal? This is the track envisaged by Moussa Diaw, also a teacher-researcher in political science at Gaston-Berger University in Saint-Louis. “People are already suffering from the high cost of living. There is a general discouragement. It is hard to see, in this explosive social context, holding, in a peaceful climate, elections on July 31 in the absence of an opposition leader like Ousmane Sonko. We must open negotiations and consider postponing the ballot, until a solution is found for the invalidated lists, ”he pleads.

Despite their exclusion, the candidates will still have the right to campaign and hold rallies. The opposition intends to take advantage of its breakthrough in the January local elections in which it won many large cities, especially in Dakar, which accounts for a quarter of the country’s voters.