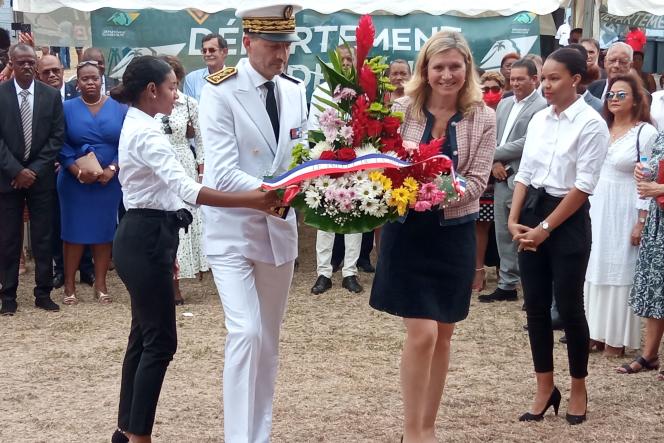 The new overseas minister, Yaël Braun-Pivet, visiting Guadeloupe on Friday, May 27, called for “looking in the face” at the history of slavery, during a ceremony to commemorate its final abolition on the island. ‘island.

“Slavery is a crime against humanity perpetrated for centuries”, she declared, in front of an audience of Guadeloupean personalities gathered at Fort Delgrès, erected as a place of memory of the Guadeloupe revolution of 1802.

Louis Delgrès, West Indian officer of the French army, had rebelled with hundreds of men against the reestablishment of slavery in the colonies, desired by the first consul, Napoleon Bonaparte. On May 28, 1802, they had chosen suicide over surrender and a return to irons. Decades later, on May 27, 1848, slavery was once again abolished in Guadeloupe, this time definitively.

In a statement, the LKP (Liyannaj Kont Pwofitasyon, “Collective Against Excessive Exploitation”) slammed the venue for what it called a “colonial commemoration” held “under the high authority of a slaver”. , the fort housing the tomb of General Richepanse, who came to restore slavery in Guadeloupe.

Listing the “wounds” endured by the Africans, deported in the slave ships, the Minister declared: “the memory of their martyrdom obliges us” and “we must look these wounds in the face, in full awareness of their sad memory”.

“Shared memory” is a “remedy” against discrimination or racism, “this remedy has a name, reconciliation”, she insisted, renewing the promise of the installation in Paris of a dedicated memorial to victims of slavery.

In a press release, the Guadeloupean Socialist Party stressed that this visit took place “in the midst of a reserve period imposed on ministers” due to the legislative campaign and was only possible “in connection with this memorial time”. This cannot “make people forget that the minister also supports the candidates of the presidential majority”, he noted.

Responding to the “Call of Fort-de-France”

Yaël Braun-Pivet held a meeting with the representatives of the communities, such as the president of the regional council, Ary Chalus, concerning in particular “the Call of Fort-de-France”. On May 17, the presidents of the regions of Guadeloupe, Réunion, Mayotte, Martinique, Saint-Martin and Guyana had launched this solemn appeal for “a profound change in policy” of the State in their territories.

All had requested a meeting with Emmanuel Macron which, according to Mr. Chalus, should be held “in September”, on a date “not fixed” yet.

In Guadeloupe, local elected officials have often expressed their disagreement with President Macron’s policy, going so far as to boycott the visit of the former overseas minister, Sébastien Lecornu, rushed to the scene during the urban riots that had rocked the island in November 2021.

“We have to work in good cooperation,” commented the new minister. It will be a question of taking into account the singularity of each territory and the priority will be to restore full republican equality. »