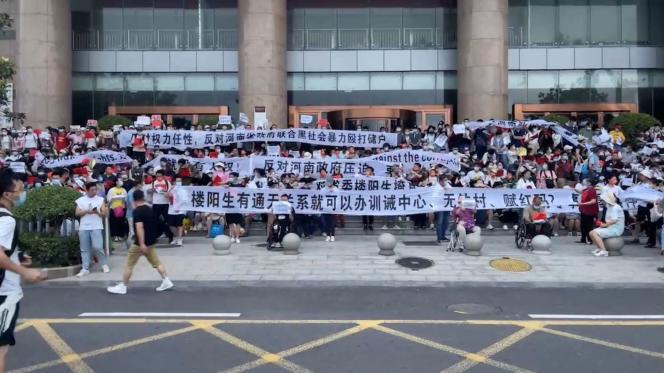 This is an unusual gesture of defiance against Chinese leaders. Weakened by the economic slowdown, four banks in Henan province have frozen all money withdrawals since mid-April, trapping thousands of small savers. This situation has since given rise to sporadic demonstrations.

To prevent new gatherings, local authorities were suspected last month of turning the health passes of a number of protesters red, making all movement prohibited.

On Sunday, several hundred people demonstrated in front of a branch of the central bank of China, in Zhengzhou, the provincial capital of Henan, according to several participants, who requested anonymity from Agence France-Presse (AFP). Photos posted on social media show banners denouncing “corruption and violence by Henan authorities”.

On videos, the content of which could not be independently verified by AFP, demonstrators are violently arrested by plainclothes agents. Some protesters have swollen faces. The participants were “beaten, injured and bleeding from the head. Disabled people have even been violently beaten,” said one.

Local authorities did not react immediately. Demonstrations in China are relatively rare, in a country where maintaining social stability is an obsession, and where power generally kills any protest in the bud. Out of desperation, some Chinese do not hesitate to take to the streets, despite the risk of arrest and prosecution.

Over the past month, authorities in Henan have come under fire after an alleged manipulation of health passes, aimed at preventing further protests. The health pass is required in China to access most buildings, shopping centers, public places, but also certain transport.

The vast majority of Chinese willingly lend themselves to the game of tracing for health purposes, but voices are disturbed about a potential drift of this tool for surveillance purposes. Like the four banks in Henan, other establishments elsewhere in China are in a delicate financial situation, exacerbated by corruption, analysts say.