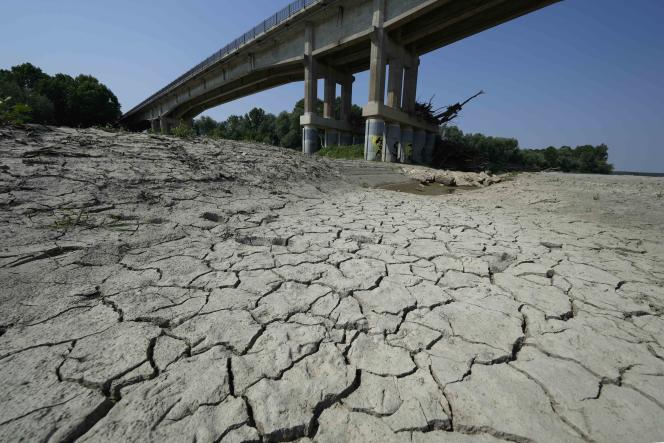 On Saturday June 25, Archbishop Mario Delpini of Milan visited the small church of Saint Ambrose in Trezzano sul Naviglio (Lombardy). There, in the company of the parish priest, the mayor of the town, several dozen families and local representatives of the Coldiretti, the powerful group of local farmers, the man of the Church gathered for a long time, reciting the rosary to implore the return of the rain, which would restore “water and freshness to the parched earth”. The same day, the prelate went to two other parishes in agricultural areas of his diocese, particularly affected by the lack of water, to continue his prayer there.

For now, the weather forecast in northern Italy remains hopelessly monotonous: blue everywhere and scorching temperatures, that’s all the oracles are predicting for the next ten days. Certainly, around June 20, there was a wave of scattered thunderstorms which helped to raise the level of the rivers somewhat. In Cremona, the readings showed that the level of the Po had risen by about twenty centimeters, but it remains dramatically low: measured at – 8.44 meters on Wednesday, it painfully arrived, two days later, at the catastrophic level of – 8.23 ​​meters.

It is by traversing from west to east the course of the largest river in northern Italy that one perceives the extent of the drama. In Turin (Piedmont), the flow of the Po was measured at 20% of its usual level. Further east, the rice paddies literally dry up and, in Ferrara (Emilia-Romagna), walkers can descend into the bed of the river and follow the thin stream of water, which struggles to advance in the middle of an immensity of sandy soil.

Downstream, the situation is even more worrying: in the Po delta, the flow of the river is so low that the water of the Adriatic Sea flows further and further inland. The phenomenon is visible to the naked eye, and surveys by environmental agencies in the region indicate traces of salt up to 30 kilometers upstream from the mouth of the river, a situation that is potentially devastating for wild flora and cultivatable soil.

However, the Po plain, which concentrates a good part of the national wealth – it is estimated that the river basin concentrates 40% of Italian GDP – has always been the most important agricultural region of the country. According to the Italian Confederation of Farmers, half of the area’s production is at risk. The same source is already announcing a 30% drop in production for melons, and up to 50% losses for corn and soybeans.

The consequences of the extreme drought affecting the Po plain do not stop at agriculture: they are also considerable in terms of energy. Several thermoelectric power stations located on the banks of the river have been shut down for weeks, for lack of the possibility of supplying their cooling circuits, while the hydroelectric power stations no longer have the minimum water necessary to operate. Thus, the four turbines of the Serafini Island power station, on the borders of Lombardy and Emilia-Romagna, have been shut down for several weeks. Electricity production has been underpowered (by 30% to 50%) since the beginning of the year and this loss of power comes at the worst time, when the war in Ukraine and the reduction in gas imports from Russia raises the threat of a major energy crisis.

The summer of 2022 is the sixth episode of serious water stress that the Po has experienced since the beginning of the 2000s, but the current crisis is by far the most serious in the seventy years that measurements have been carried out. Moreover, it does not touch the Po Valley alone. With a rainfall deficit of more than 50% since the start of the year, the entire north and center of the country are affected. Everywhere in Italy, even if most local elected officials are doing everything to avoid restrictive measures and above all calling on their fellow citizens to be civic-minded, municipal decrees are multiplying. Public fountains shut down, watering prohibited between 8 a.m. and 9 p.m., water restrictions at night… For the time being, these measures do not affect large urban centers, but summer has only just begun and the season dry is still long.

Asked about the situation in the Senate on June 15, the Minister of Ecological Transition Roberto Cingolani identified several avenues for “structural interventions” to be carried out in the coming years. “We need a massive investment to reduce water losses, which exceed 40% on our 24,000 kilometers of pipes, and to increase our rainwater storage capacities, by creating a number of basins”, he said. -he explains. “A quarter of the rainfall we have would suffice for the needs of agriculture and, on this subject, we can resort to funding from the European recovery plan,” added the minister.

Accustomed to a rather favorable precipitation regime, the Peninsula suffers from structural underinvestment in its network of pipes. The repetition of drought episodes risks forcing the country, in the coming years, to tackle the problem head-on.