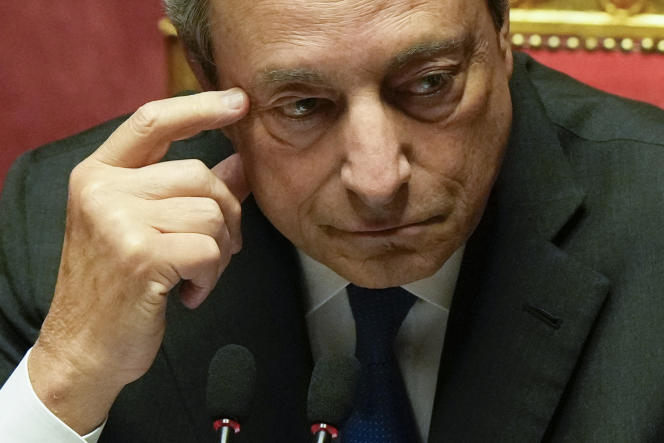 Italian Prime Minister Mario Draghi said he was ready on Wednesday July 20 to remain in office, provided that the parties of his coalition fall into line around a “pact” of government, jeopardized by the defection last week from the 5 Star Movement.

Arrived at the head of the executive in February 2021 to get Italy out of the health and economic crisis, Mario Draghi presented his resignation on July 14 to the President of the Republic, Sergio Mattarella, who immediately refused it.

He felt his government of national unity, running from the left to the extreme right, had lost legitimacy after the crisis caused by the defection the same day during a key vote in the Senate of the 5 Star Movement (M5S ), itself faced with strong internal dissension and a haemorrhage of parliamentarians.

Mario Draghi’s speech on Wednesday morning before the Senate was therefore eagerly awaited. Some feared that he would confirm his resignation out of hand, but he instead made it known that he would remain at the helm if his coalition managed to reunite and thus avoid an early election, returning the ball to the court of the parties , who will have to accept or not his offer. “The only solution, if we still want to stay together, is to rebuild this pact from its foundations, with courage, altruism and credibility. That’s what the Italians are asking for,” added the former head of the European Central Bank, on the strength of polls claiming that two-thirds of Italians want “Super Mario” to stay in office.

Severe with the parties

A vote of confidence must be organized in both chambers, Wednesday in the Senate then Thursday in the Chamber of Deputies, to finally see things clearly.

The Prime Minister also made a sign of openness towards the M5S, an ardent defender of the universal minimum income threatened by the right, judging the latter “important for reducing poverty although it can be improved”. He also mentioned another measure dear to his turbulent partner, the introduction of a legal minimum wage: “It is in this direction that we must move forward, with the social partners. »

“Italy is strong when united,” he said. The domestic (economic recovery, inflation, employment) and external (energy independence, war in Ukraine) challenges facing Italy and the European Union “require a truly strong and united government and a Parliament that accompanies it with conviction” , he said.

The 74-year-old banker, himself never elected to political office, was particularly severe with the parties, which he directly challenged: “You, the parties and the parliamentarians, are you ready to rebuild this pact? ? Are you ready to confirm this effort that you made during the first months and which then weakened? You don’t owe the answer to this question to me, but to all Italians,” he said.

The center and the left support him

For Francesco Galietti, founder of the think tank Policy Sonar, “Draghi was very tough, but he resorted to a bit of carrot and stick.” “Draghi’s idea was to pull the rug out from under the feet of the ‘5 stars’,” he told Agence France-Presse.

As expected, the center and the left immediately confirmed their support. “If we were already convinced in recent days to renew confidence in the Draghi government, we are even more convinced after listening to him,” tweeted the leader of the Democratic Party (PD, left), Enrico Letta.

For their part, Forza Italia, the right-wing party led by former Prime Minister Silvio Berlusconi, and the League, the far-right party of populist tribune Matteo Salvini, said they were ready to continue the adventure, but to the condition that a “new government be appointed, led by Mario Draghi, without the 5-Star Movement and deeply revamped”.

Whatever the outcome of this Italian-style political soap opera, the ratings agency Fitch believes that it “is a symptom of greater political uncertainty, even if a snap election is avoided”, making structural reforms and fiscal even more difficult while Brussels and its European partners are also urging Mr. Draghi, a guarantee of stability, to stay.

Markets are watching the situation carefully: the very possibility of the departure of the chief executive has revived fears of a surge in the country’s borrowing rates, which could prove explosive for the euro zone, whose l italy is the third largest economy.

In Italy, Mario Draghi ready to stay if the parties of...

News Editor - July 20, 2022 0
Italian Prime Minister Mario Draghi said he was ready on Wednesday July 20 to remain in office, provided that the parties of his coalition...

Who is really Marion Rousse, the great lady of the Grande...

Brussels proposes to reduce gas demand by 15% by limiting heating...

“Readers’ Voices” – Is political action a victim of the acceleration...