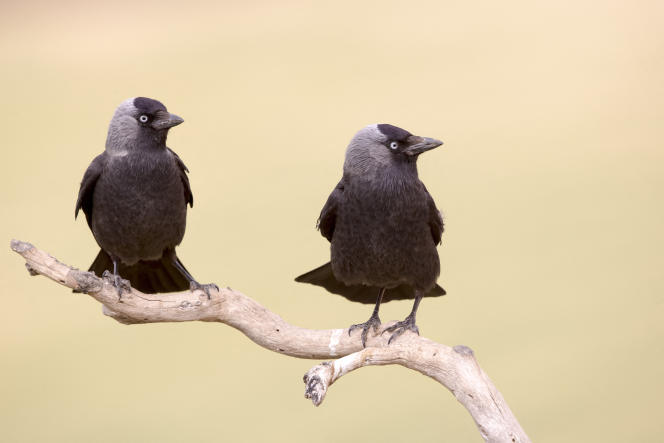 The hero of our column of the day is well known to regular readers of this newspaper. No earlier than Saturday, May 28, “M Le magazine du Monde” even devoted its cover and a remarkable investigation to the jackdaw and the controversies born of its proliferation. To this famous main course, we propose today to add a small dessert with a scientifico-political coloring.

The team led by Alex Thornton, at the University of Exeter (United Kingdom), devotes its research to the challenges posed by the social life of animals. This time, her inspiration came from the swarms of jackdaws springing from the trees in the neighborhood every morning. “We wondered how they decided to leave together,” he says. The answer, given on May 23 in the journal Current Biology, he summarizes in a few words: “By vocal consensus. »

The quest for consensus in animals is not a new object of study. Over the years, scientists have already noted “democratic” behaviors in several species, from bison to macaques, from capuchins to buffaloes, from deer to bees, from meerkats to wild dogs. Through sound or gesture, individuals express their willingness to leave a place of rest, sometimes even indicate the direction they wish to take. And in its great wisdom, by a typically collective intelligence, a decision is made, as long as the quorum is reached.

The Cornish researchers came to the same conclusion. Hours of audio and video recordings of six groups of jackdaws, numbering 160 to 1,500 individuals, revealed an almost unchanging pattern. The first cries rise well before sunrise. They call others. The concert increases in intensity, over several tens of minutes. Then suddenly, in a few seconds, most of the birds fly away. This “explosion”, the scientists were able to observe that it intervened from a certain sound level or following a sudden increase in intensity. Without such a quorum, the birds wait and end up scattering in pairs or small groups. “Observing such a difference, whether the birds come to a consensus or not, was for me the most impressive result,” said Alex Dibnah, the first author of the paper.

But do the sound settings actually cause the start? In other words, is there causation or simple correlation? To determine this, the scientists added to the ambient cacophony additional recordings of corvids in a third of the cases, wind noise in a second third and nothing at all in the third. Conclusive result: by their enticed cries, the birds of the first group took off six and a half minutes before those of the other two samples.

A specialist in baboons but also in meerkats, Elise Huchard (CNRS, Montpellier) praises “a powerful approach that combines observations and experiments, generating particularly simple and clear results”. The size of the groups studied – hundreds of individuals of all generations and without family ties – also provides “an unprecedented context for the experimental approach proposed here, even though the nature of the coordination mechanisms is particularly intriguing on such a scale” .

Hallie Walker, first author of a study on deliberation in wild dogs, hails “the causal link established by the authors, which goes far beyond what has existed so far”. Ethologist and specialist in collective behavior, Guy Théraulaz, in view of the “variability of the data”, puts a damper on this craze, “not completely convinced that the level of vocalization plays a real causal role in the synchronization of flight”.

Cornish researchers are now looking for disturbing factors. Starting with visual and noise pollution of human origin. Do they provide a barrier to consensus building? Something to inspire the modern fabulist.

Find all our articles on zoology here