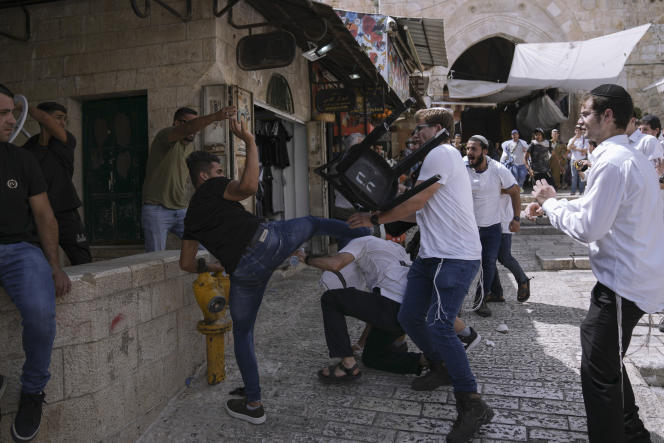 Clashes between Palestinians and Israeli police, parade of Israelis waving national flags, police on alert: tension was high on Sunday, May 29, in Jerusalem for the “flag march” marking the conquest of the eastern part of the Holy city by Israel.

Sunday morning, a few hours before the march which started at 4 p.m. local time, the tenor of the Israeli far right Itamar Ben Gvir went to the esplanade of the Mosques, a holy place at the heart of Israeli-Palestinian tensions in the Old City in East Jerusalem, Palestinian part occupied since 1967 by Israel.

Under a historical status quo, non-Muslims can go to the esplanade, entering through a single door and at specific times, but cannot pray there. However, in recent years, a growing number of Jews, often nationalists, have been surreptitiously praying there, a gesture denounced as a “provocation” by the Palestinians.

On Sunday, around 1,800 non-Muslims, the majority of them tourists but also Israelis, visited the esplanade, police said, reports Agence France-Presse (AFP).

At Damascus Gate, the main entrance to the Muslim quarter of the Old City, brief clashes between Palestinians and Israeli police broke out and several Palestinians were arrested, according to an AFP photographer on the spot. Stones were thrown by Palestinians at Israeli forces controlling access to the holy site, witnesses said.

The majority of traders have closed shop in the Muslim quarter and residents have stayed at home. In the street, dozens of young nationalist Jews sang and danced while waving Israeli flags, an AFP journalist noted.

Fearing slippages, the police mobilized 3,000 officers for the march of Yom Yerushalaim or Jerusalem Day, which marks Israel’s “reunification” of the Holy City, after the occupation and annexation of its eastern part.

According to the Israeli daily Haaretz website, “Jewish participants entered the Muslim quarter, pepper spraying and beating the Palestinians, who in turn threw chairs and bottles at the Israelis.”

“In one of the scuffles, a Jewish Israeli was seen using pepper spray against a Palestinian woman,” adds The Times of Israel.

Threat of an escalation of violence

Last year, on the day scheduled for the “march of the flags” according to the Hebrew calendar and after days of Israeli-Palestinian violence in East Jerusalem, the Palestinian movement Hamas in power in Gaza launched volleys of rockets into Israel , a prelude to an eleven-day war between the two camps.

This year, Palestinian groups have again threatened to “respond” if there is violence during the march, or even if participants go to the esplanade. “We will not hesitate to use all possible means. (…) Israel will pay a high price for it, ”warned Ghazi Hamad, a figure in the Islamist Hamas, on Saturday.

But according to Shlomo Mofaz, a security analyst and former high-ranking Israeli military intelligence officer, “Hamas has no interest in starting a new war (…) because it is focused on rebuilding Gaza”.

Still, he notes, violence with Palestinian injuries or deaths could spur him, or other Palestinian groups like Islamic Jihad, into action. And he added: “maybe” Iran, a supporter of these groups and an enemy of Israel, “will encourage [them] to break the routine” and launch rockets at Israel.