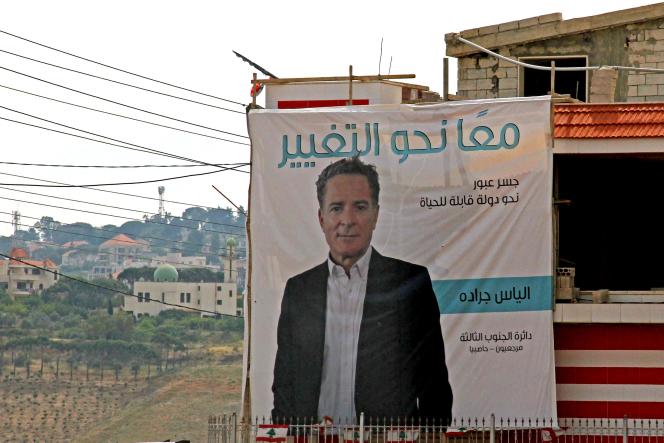 A small jolt shook the traditional Lebanese parties in the May 15 legislative elections. For this first post-“thaoura” (the “revolt”) election, the protest movement of October 2019 which demanded the departure of political leaders accused of having plunged the country into crisis, the candidates of the opposition make a significant breakthrough. Thirteen of them obtained one of the 128 seats in the next assembly, according to final results published on Tuesday, May 17 in the morning.

They will enter a Parliament strongly polarized between the Shiite armed movement Hezbollah and its pet peeve, the Lebanese Forces (FL). The Christian right party led by Samir Geagea, which has campaigned against pro-Iranian Hezbollah and its weapons, is emerging as the leading Christian force in the country. The decline recorded by the Christian party Cour patriotique libre (CPL) of President Michel Aoun causes Hezbollah and its allies to lose the parliamentary majority they had acquired in 2018.

“This polarization has overshadowed the debates on the crisis. We played the politics of fear and community withdrawal. The ballot turned into a referendum for or against Hezbollah, which complicated the task of the opposition,” said Karim Bitar, director of the political science department at Saint-Joseph University in Beirut. Favored by an electoral system that reinforces their domination, the traditional parties have also used patronage mechanisms, with vote buying, and sometimes pressure on voters and their rivals. According to the Lebanese Association for Election Democracy (LADE), the poll was marked by irregularities, scuffles and cases of voter intimidation.

But, among many Lebanese, disenchantment prevailed. Worn down by the economic and financial crisis, and convinced that the election was a foregone conclusion, a majority of the population chose to abstain. According to partial results, 41% of the population turned out to vote, down from 2018 (49%). The mobilization of expatriates in certain countries, notably the United Arab Emirates and France, has however worked in favor of the opposition. The last counting of ballot boxes from abroad kept the suspense until late in the evening on Monday, concerning the victory of certain candidates.

This is the case of the unprecedented victory of two candidates from the opposition list “Together for Change” – the Greek-Orthodox candidate Elias Jarada, and especially the Druze candidate Firas Hamdan – who snatched their victory against the list of the Shiite Hezbollah-Amal tandem in their stronghold in southern Lebanon. Other victories also tasted like revenge for the proponents of change. Heavyweights of the political and financial oligarchy have lost to opposition candidates, like the pro-Syrian Druze leader Talal Arslan, the vice-president of Parliament Elie Ferzli or even the banker targeted by the ” Pandora Papers”, Marwan Kheireddine.

“The breakthrough of these candidates bodes well for a reformist, non-community opposition to the assembly. But there has been no fundamental upheaval because the electoral law is flawed, it favors the renewal of the class in power, “said political scientist Karim Bitar. The former director of the French-language daily L’Orient-Le Jour, Michel Helou, thus lost to the candidate supported by the Lebanese Forces, Camille Chamoun, with 5,500 votes to 1,800, his list having not exceeded the threshold of ‘eligibility.

“We will have to form a unified bloc otherwise we will lose our credibility, which will be a loss for all Lebanese”, already warned before the election the Druze candidate Mark Daou, winner in the constituency of Aley against Talal Arslan. Alliances could be envisaged with deputies from the Christian party of Kataeb, who entered the opposition, as well as independents who broke with the traditional parties, like Oussama Saad, Neemat Frem or Michel Moawad. “We need a real break among these deputies,” said Karim Bitar, who fears that certain figures will be “co-opted by the traditional parties” in an assembly polarized between Hezbollah and its detractors.

Hezbollah and its allies suffer a setback. The Party of God and the Amal party of Parliament Speaker Nabih Berri won all 27 seats reserved for the Shia community. But, with only 62 deputies in total for their camp, they lose their parliamentary majority. This is due in particular to the decline recorded by the Christian party Cour patriotique libre of President Michel Aoun, their ally since 2006, which won 18 seats (compared to 21 in 2018). Its leader, and son-in-law of the president, “Gebran Bassil failed to convince that he is a man of change and the Christians also made Michel Aoun pay for his alliance with Hezbollah, even if the CPL managed to save furniture,” analyzes political expert Khaldoun Al-Sharif. Pro-Syrian candidates, allied to Hezbollah, were also swept away in many constituencies.

On Monday evening, the leader of the Hezbollah parliamentary bloc Mohammad Raad warned, without naming them, the FL, which has made significant gains. “Pay attention to your speech, your behavior and the future of your country. We accept you as adversaries in parliament, but not as shields protecting the Israelis,” he charged. Samir Geagea’s party wins 20 seats – against 15 in 2018 – and becomes the first Christian force in the country ahead of the CPL.

The confrontation between supporters of Samir Geagea and supporters of the Shiite tandem during the Tayyouné events in October 2021 strengthened the Christian party. The Lebanese Forces have also benefited from substantial support from Saudi Arabia, which returned to the Lebanese game in April after five months of open crisis with Beirut. In the FL camp, the Progressive Socialist Party of Druze leader Walid Joumblatt is holding its own, and some of its Sunni allies, such as Ashraf Rifi in Tripoli, have done well. The Sunni community, which has strongly abstained, is pronounced against the former prime ministers, in particular the outgoing head of government Najib Mikati.

The latter called on Monday evening for the formation without delay of a government to implement the reforms necessary to end the crisis, including those demanded by the International Monetary Fund. “Faced with this polarization, there is a risk of blocking the formation of the government, warns Karim Bitar. We will have to find consensus figures for the posts of Prime Minister and President of the Republic “, whose mandate ends in October.