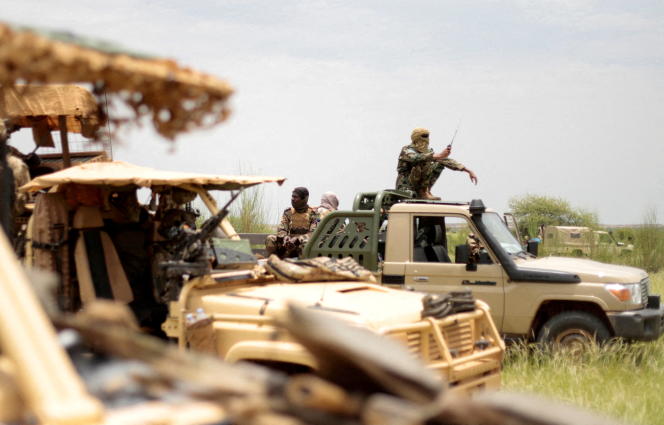 The number of civilian deaths and rights violations attributable to the Malian army supported by foreign military experienced an “exponential increase” in the first quarter of 2022, the UN mission (Minusma) said on Monday (May 30). in the country. The junta in power since August 2020 in this country plagued by the spread of jihadism and violence of all kinds has refuted these claims.

While jihadist groups affiliated with Al-Qaeda or the Islamic State (IS) organization remained the main perpetrators of violence against civilians, Minusma counted 320 violations attributable to the security forces, supported “on certain occasions by elements foreign servicemen”, in the first three months of the year, compared to 31 in the previous quarter. Of these 320, 248 resulted in the death of civilians, says Minusma in a quarterly note. She speaks of “extrajudicial executions”, enforced disappearances and acts of torture.

It is not up to the Minusma to say the origin of “foreign elements”, declared by videoconference Guillaume Ngefa, its director of the human rights division, despite the suspicion weighing on the Russian private security organization Wagner.

The junta has turned away in recent months from France and its European partners, and turned towards Russia. The Europeans announced their military withdrawal from Mali in February, citing the use of the colonels by the Wagner Group, despite the Wagner Group’s controversial actions, as well as the “multiple obstructions” by the Malian authorities to their action after years of ‘commitment. The junta talks about enhanced state-to-state cooperation with Russia.

Mr. Ngefa clarified that the counts “do not include the events in Moura”, which are still under investigation despite the junta’s refusal so far to allow UN experts to visit. square. This locality in the center of the country was the scene, at the end of March, of what Human Rights Watch describes as the massacre of 300 civilians by Malian soldiers associated with foreign fighters, possibly Russians. The Malian army denies and claims the elimination of more than 200 jihadists.

The Minusma details a series of cases, such as the death of at least 21 civilians summarily executed according to it by the Malian forces and 18 others missing on December 31 in the Nara region. The Minusma writes that “the majority of the victims of these violations were members of the Fulani community”. This is readily considered by some Malians as a source of recruits for the jihadists.

The Minusma submitted the note to the Bamako authorities before its publication. In a response memorandum consulted by AFP, Malian Foreign Affairs castigates “allegations […] very often tendentious, not cross-checked” and not “based on any tangible evidence”. They aim to “discredit” the Malian forces, they claim. Foreign Affairs reiterates on several occasions that strict respect for human rights is taken into account in the training of soldiers and the preparation of operations.

Responding to each case exposed by the Minusma, they object several times that the authorities have opened their own investigation and that the mission’s purpose is based on documents “constructed from scratch”. In the case of Nara, they argue that a “free layer of the population […] is won over to the cause of the terrorists” and “would even be able to invent stories in order to tarnish the image of the army “. The memorandum criticizes the Minusma for ignoring the “remarkable progress” made to protect human rights and improve security. The junta regularly claims to push the jihadists to “disbanding”.

The Minusma note paints a much darker picture. The number of people killed by all parties (Islamist or other armed groups, militias and self-defense groups, defense forces) more than quadrupled from one quarter to another, from 128 to 543, says Minusma. The UN is “very concerned” about the general security situation and the deterioration observed in the center, in the so-called “three borders” area (with Burkina Faso and Niger) and in the north, said Daniela Kroslak , Deputy Special Representative of the United Nations Secretary General.

The Minusma reports an intensification of attacks by jihadist groups, a strengthening of their presence in the center and in the north and a “worrying expansion” towards the south. The Minusma also deplores a “continuous narrowing of civic space and democratic debate and the restriction in the exercise of public freedoms”.