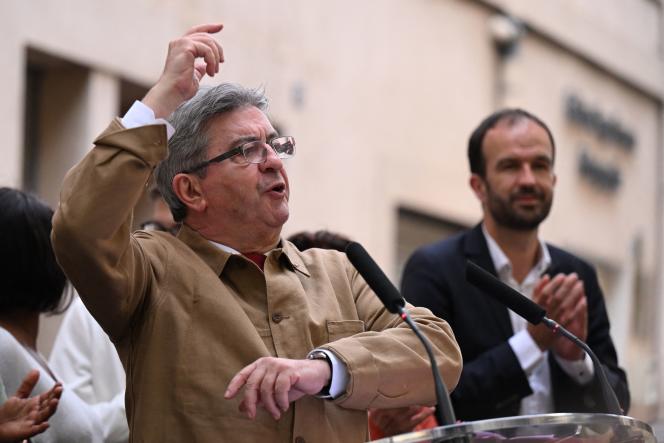 At the bend of a sentence, dropped in the last minutes of a speech of almost an hour, Jean-Luc Mélenchon, at the same time, confirmed that he was not presenting himself to the legislative elections, put an end to his Marseille adventure which has been going on since 2017, and enthroned his successor in the fourth constituency of Bouches-du-Rhône, his presidential campaign manager, MEP Manuel Bompard.

Thursday, May 12, at the foot of his parliamentary office in front of a few hundred activists, the leader of La France insoumise knowingly avoided giving this expected event the solemnity of a passing of the baton. Framed by the other Marseille candidates of the New People’s Ecological and Social Union (Nupes), he preferred to decline what his action as Prime Minister would be and attack the policy of the “monarch” Macron.

Silent at the podium, Manuel Bompard only uttered his first words as a candidate a few minutes later. By benefiting from the investiture of the new popular union in this territory which votes resolutely on the left, the MEP, 36, sees his parachuting double as a legacy. In the first round of the presidential election, this constituency, which extends in particular over the first three districts of the city and includes very impoverished neighborhoods, gave 54.4% of its votes to Jean-Luc Mélenchon. “I will first address these voters, and tell them that if they repeat their vote, we can even be elected in the first round,” projected Manuel Bompard, who revealed that he had settled in the city for a few months and says he wants to “build [his] political career in Marseille”. If he is elected to the National Assembly, he has confirmed that he will give up his function as an MEP. But not its major role in the organization chart of LFI.