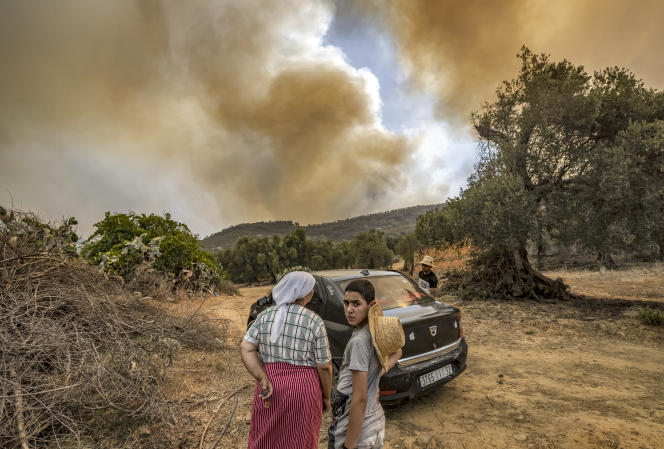 One person has been killed in violent fires that have ravaged remote wooded areas of northern Morocco since Wednesday, causing the evacuation of hundreds of families and destroying thousands of hectares of forest, authorities said on Friday (July 15th). Agence France-Presse (AFP).

“The body of a person with multiple burns was found” in one of the fires in the Larache region, according to a statement from the authorities.

At least 2,000 hectares of forest massifs – especially oaks and conifers – have already been destroyed in the provinces of Larache, Ouezzane, Tetouan, Taza and Chefchaouen, the last affected, all located in the north of the country, according to a provisional report Friday evening.

The rapid progression of the flames, fanned by gusts of wind up to 45 km / h, forced 1,156 families to evacuate seventeen douars (“villages”) in the burnt areas of Larache, where three major outbreaks persist.

In the region of Tetouan, near the Mediterranean port of Tangier, around sixty houses burned down and nearly a hundred heads of cattle perished. No less than 247 people were evacuated. In Taza, 420 villagers had to leave their homes in eight douars.

In addition to four Canadair water bombers from the army and four spray planes, hundreds of elements of civil protection, water and forests, the Royal Armed Forces (FAR) and the gendarmerie, assisted by local authorities and volunteers, were mobilized to try to stop the advance of the fires, noted an AFP photographer. Reinforcements have been dispatched to the affected areas.

In stifling heat, well above 40°C, surprised by the speed of the fire’s progression, villagers hastily left their homes, bringing with them cattle and horses when possible. “Yesterday evening I was with the family and at one point you hear people shouting, ‘Fire! Fire !” We went out to flee and fortunately, thanks to God, the fire was directed towards the top of the mountain,” testified Samir Boundad, a young man from Larache.

Morocco has been hit for several days by a heatwave, with temperatures approaching 45°C, in a context of extraordinary drought and water stress. Across the Strait of Gibraltar, fires are raging across southern Europe, from Portugal to Greece to Spain and France.

“It’s the heat that causes this kind of fire. The fire reached our village at dawn yesterday, but we are confident that the firefighters will put it out,” Ahmed Mezouar, 58, a resident of Larache, told AFP. “We fear for our homes. A nearby village was completely surrounded by fire. The inhabitants were evacuated by the firefighters, for the moment we are safe from the fire, ”he reassured himself.