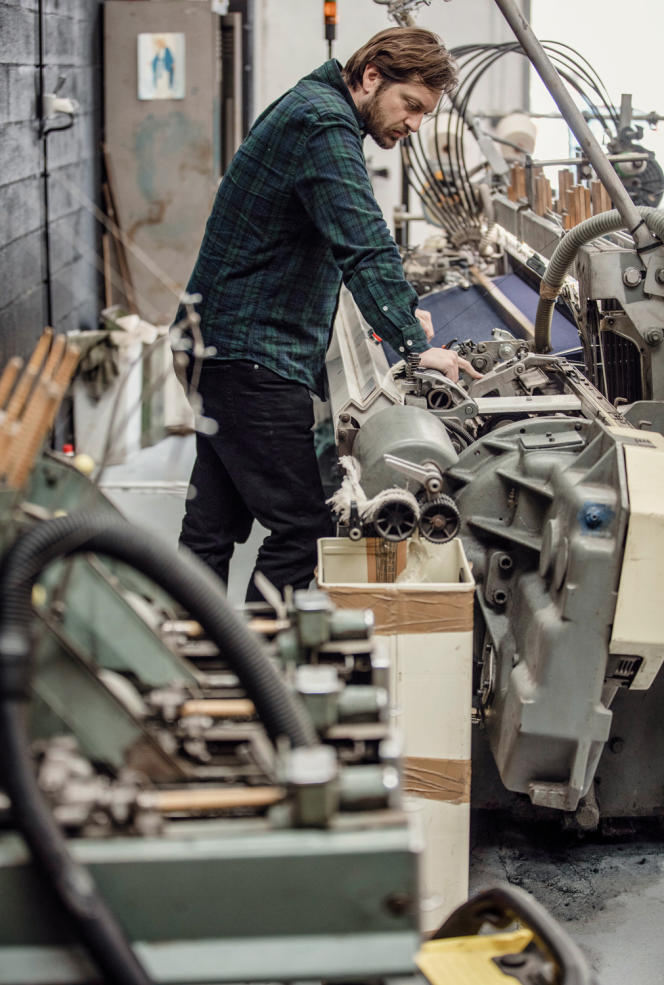 Every Pentecost weekend, when the feria de Nîmes arrives, a good part of the aficionados display the same dress code: white t-shirt and jeans. For the 70th anniversary of the event, this year, it is impossible to escape this trend. Because in the Gard prefecture, everyone is convinced that denim has its roots in the “toile de Nîmes”.

For nearly five years, the association Les Gens Denîm has wanted to explain to the whole world that if Levi Strauss was able to make a fortune, it is partly thanks to Nîmes. At Les Enfants Denîm, a very popular bar during the feria and the rest of the year, the owner Corentin Carpentier is one of the ambassadors of this heritage. He declines it both in the decoration of his festive place and through his outfits. At the other end of the city, the Montaury district committee even aims to create a festival dedicated to jeans.

Guillaume Sagot, 36, founded the Ateliers de Nîmes in 2016 to manufacture jeans. Initially, he bought the fabric in Italy and had the jeans assembled in Marseille or Bobigny. “Then in 2020, he explains, I wanted to make canvas to revive this local know-how which has completely disappeared from the city and was a bit forgotten”.

In a former shoe factory, an old weaving loom from a village in the Loire has just returned to service. When the machine restarts, noisy and imposing, it imposes its pace and rhythm to make the thick indigo canvas. On the large cylinder, 700 meters of “twisted” threads intersect to give this resistant canvas that is denim. The denim is made on site with the support of two former textile workers.

Originally from the Loire, Lucien Bialic and Alain Beauchemin, found themselves thanks to an article in Midi libre which evoked Guillaume Sagot’s “a little crazy” project. “One day, Alain, who lived in the area, called me to tell me this story and we wanted to help Guillaume”, says Lucien, who still lives in the Loire and travels several times a month by as an expert. “By sound, I can tell if everything is working fine or if there is a problem,” he says, happy to see that “a young man is putting our manual loom back on track and bringing denim back to the House “.

Produced in the Cévennes

Today, the Ateliers de Nîmes produce 2,400 pants a year, assembled in Portugal and sold for between 130 and 180 euros each in about fifteen stores in France, including La Samaritaine and Le Printemps Haussmann, in Paris. A first victory for Guillaume Sagot, who employs four people and wants to make his brand an ecological model. “Our goal is to produce work that is thoughtful and less harmful to the environment, with as little water as possible, without the use of polyester or solvents. We want to make customers aware of this aspect. »

The people of Nîmes would like us to remember the role of their city in the past of jeans, even if it remains difficult to confirm. “History is vague, recognizes Alain Boix, director of the Esmod school in Lyon, but I think that Nîmes has a part in jeans in its history. In the 16th century, weavers were numerous in this southern city.

They exploit in particular the silk and the wool produced in the neighboring Cévennes to make a thick canvas, especially intended for the peasants, and which, according to Alain Boix, has the particularity of having an “indigo blue warp thread and an ecru weft thread “. “The city had its textile industry, which notably manufactured twill [a type of fabric] and a Nîmes would one day have had the idea of ​​sending rolls of this fabric to Genoa, a great textile power and importer of the color indigo. It is in fact from this city that the word “jeans” comes from, which corresponds to “Genoa” pronounced in English…”

The municipality of Nîmes, which is fighting to obtain the UNESCO label for the Roman temple, the Maison Carrée, is becoming aware of the potential of this story. The new Culture Assistant, Sophie Roulle, is determined to move the lines: “So far, the history of jeans has not been highlighted too much, but we are working to obtain elements scientifically and culturally proven. We are also thinking about the idea of ​​a museum dedicated to textiles and canvas from Nîmes. »

This museum, carried by the mayor (LR) Jean-Paul Fournier, will certainly not see the light of day for several years, but Guillaume Sagot, he is betting on the future. A new, much more modern loom is due to arrive in his workshop in the coming weeks to increase fabric production. Target set: 20,000 jeans per year.