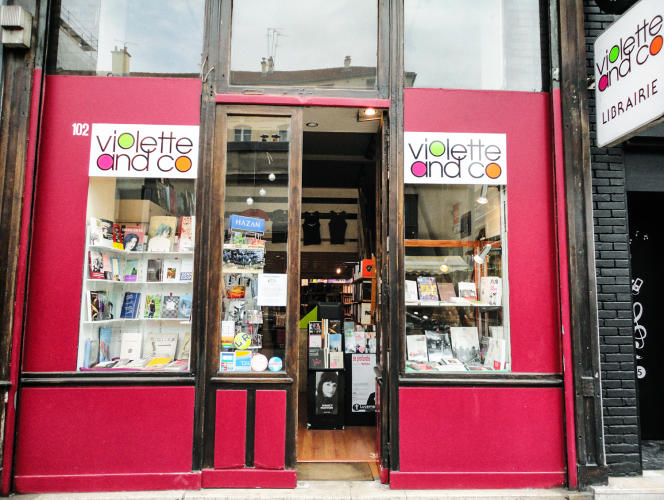 From retirement to reopening

After several months of mobilization, the feminist and lesbian bookstore Violette and Co at 102, rue de Charonne, in the 11th arrondissement of Paris, will be reborn. On February 12, the adventure almost came to an end with the retirement of the two founders, Catherine Florian and Christine Lemoine, after eighteen years of good and loyal service. A group of six women in their twenties, from different backgrounds but all loyal customers of the bookstore, decided otherwise. Unable to bring themselves to close this place “which counted a lot”, they launched a crowdfunding campaign in March. Completed on June 4, it raised more than 172,000 euros for a reopening “ideally in September”.

Violette and Co was born in 2004 from a combination of circumstances. The founding couple wanted to embark on a new professional life. The closure, a year earlier, of the LGBT bookstore Pause lecture, rue Quincampoix, in the 3rd arrondissement, which they frequented, acted as a catalyst. They decide to open the first feminist and lesbian bookstore in France. But, very quickly, they realize that the path is strewn with pitfalls: financing difficulties, accusations of selling pornographic books… “In the context of the time, it was not easy to advertise itself as a feminist and lesbian,” recalls Catherine Florian. After deciding on the name in reference to the 20th century lesbian novelist Violette Leduc, they settled “by a happy coincidence” in the neighborhood where she lived.

A place of transfer

“Summarizing eighteen years in a few words is difficult. “But, if there is one that the sexagenarians repeat at will, it is” transmission “. More than a bookstore, Violette and Co is a place of memory and sharing, where literary meetings, exhibitions and creative writing workshops were organized. On the shelves were the very sharp writings of essayists Monique Wittig or Adrienne Rich, lesbian romance or confidential works. We wanted to “bring together in one place everything that existed, without distinction, and to make these editorial tools available,” emphasizes Christine Lemoine.

The beginning of a new era

“We want to be part of continuity, explains Lucile Regourd, one of the buyers, but while adding our touch. On the graphic identity, for example. If the catalog of references is reconstituted identically, it will however be enriched with new works, in particular in children’s literature. In the new premises, which have yet to be found, a café area will invite conviviality and strolling. “We think it’s great! They show great gratitude and have the desire to perpetuate the spirit of Violette and Co, welcome Catherine Florian and Christine Lemoine. Things will change, of course, but we are confident. »