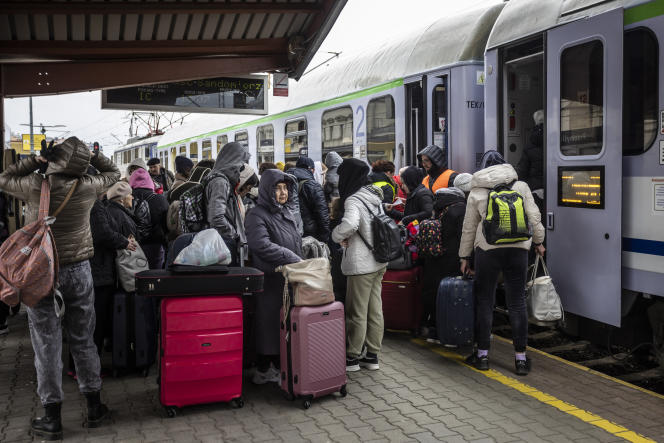 “It’s horrible to have had to go into exile twice in two different countries, I don’t wish that on anyone,” sighs Eugenia Dolgaya. This 29-year-old Belarusian journalist fled repression in her country by settling in Ukraine in November 2020, then was forced to take refuge in Poland in March 2022 to escape Russian bombs. “I lost all my things in the apartment I was living in kyiv. Since then, I no longer have a plan for the future,” adds the young woman. Return to his native country? Impossible, under penalty of tasting once again the jails of the regime of Alexander Lukashenko, in power for twenty-eight years, and fraudulently re-elected in August 2020.

“I crossed the Polish-Ukrainian border when Russian rockets were fired from Belarus,” says the mother. The Ukrainian border guard frowned upon seeing my Belarusian passport. I held my breath so he wouldn’t write anything on it. I was terrified that he could invalidate my only identity document. I then showed him proof of my status as a political exile and expressed my opposition to the war in Ukraine. He ended up putting his stamp. »

But since her arrival in Poland, Eugenia has had a series of disappointments. During a taxi ride, she comes across a Ukrainian driver who says he wants the Belarusians to end up killed just like the Russians. The journalist may explain to him that she is an opponent of power, the man does not want to hear anything. A few days later, the bank card that the journalist had obtained from a Polish bank got blocked. Another day, in a shop, a Ukrainian employee refuses to serve her, claiming that she does not understand the Belarusian language, which is very close to Ukrainian. “I confess that I do not understand this outpouring of hostility. Despite all the risks involved, Belarusians protested against the war in February. They are now in prison, ”recalls the journalist.

“Ukrainians and Russians have the same enemy: Putin”

“This war generates a lot of emotions and there has been a noticeable wave of discrimination against Belarusians living in Poland. Three months after the start of the Russian aggression, people have become more rational and hostility towards Belarusians has decreased,” remarks Alina Koushyk, a Belarusian journalist with long-term residence in Poland and working for Belsat, a Belarusian television channel. independent, which broadcasts from Poland.

Konrad Dulkowski, president of the Center for Monitoring Racist and Xenophobic Behavior, an NGO based in Poland, noted dozens of manifestations of hostility, violence and discrimination against Belarusians residing in Poland in the early days of the war: refusals to open bank accounts, to rent an apartment to Belarusians, damaged cars registered in Belarus, etc. “Solidarity towards Ukrainians has been accompanied by hatred towards people who have been unfairly associated with the Lukashenko regime, analyzes the 50-year-old. In Poland, some have forgotten that the Belarusians themselves had fled this regime which today collaborates with Vladimir Putin. »

If President Lukashenko, an ally of Vladimir Putin, has indeed made his territory available to the Russian army since the war in Ukraine, polls indicate that a large majority of Belarusians oppose this conflict. Hundreds of them joined the Kastous-Kalinowski battalion alongside Ukrainian forces, and railway workers participated in sabotage operations in Belarus, slowing the deployment of Russian forces in Ukraine. Acts punishable by death in the country of Lukashenko.

“Of course, the suffering of Ukrainians is beyond compare,” says journalist Alina Koushyk. In Belarus, we did not experience mass executions or bombings, but we lost our country. And the 5,000 Belarusians who had taken refuge in Ukraine following the rigged elections of 2020 had to go into exile once again, most often in Poland. These gestures of rejection are all the less understandable since the Ukrainians and the Belarusians have the same enemy: Vladimir Putin”, continues this dissident, co-founder of the Belarusian Solidarity Center in Warsaw, a new gathering place for dissidents living on the banks of the Vistula since summer 2020.

Poland then opened its borders wide to Belarusian democrats, hunted down by the Minsk regime. Warsaw granted more than 90,000 humanitarian visas to Belarusians in 2021, and several thousand were also granted asylum. “Following the 2020 revolution, the whole world saw that Belarusians were fighting for democracy,” continues Alina Koushyk. But after the invasion of Ukraine, we became co-aggressors overnight. »