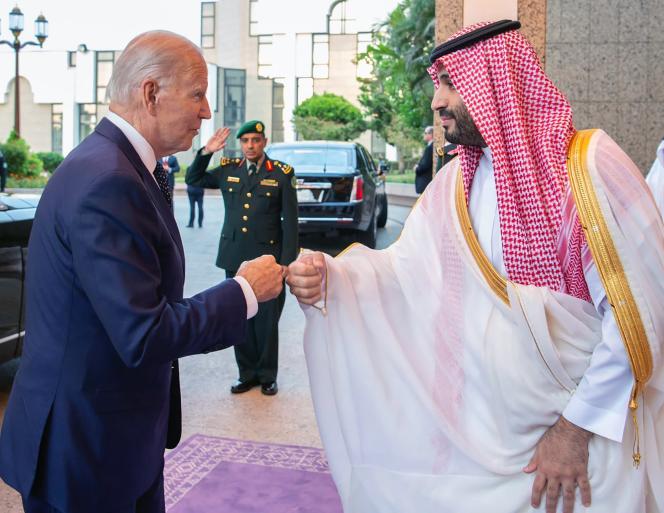 During his visit to Saudi Arabia on Friday July 15, US President Joe Biden warned Ryiad of a “response” in the event of new attacks on dissidents, after a meeting with Crown Prince Mohammed bin Salman, considered by Washington to be the sponsor of the assassination of journalist Jamal Khashoggi.

Air Force One landed in Jeddah, western Saudi Arabia, after a direct flight from Israel, a first as Washington seeks to normalize relations between its two most important partners in the Middle East. Joe Biden was greeted at the royal palace in Jeddah by Mohammad bin Salman, nicknamed “MBS”, fist-checking the 36-year-old de facto ruler of the Saudi kingdom.

In Jeddah, Joe Biden also met King Salman, ill and 86 years old, before a “working session” led by Prince Mohammed, essential on all issues, from oil to the military. The meeting between Messrs. Biden and bin Salman is the high point of this Middle East tour, as Washington seeks to convince the kingdom to open the floodgates on its oil production. The challenge: to lower the price of a gallon of gasoline as the midterm elections in the United States approach.

American “response” in the event of a recurrence

But when he was still a candidate, Joe Biden promised to treat Saudi Arabia as an “outcast,” particularly over the 2018 assassination of journalist and critic of the Saudi regime, Jamal Khashoggi. Once elected, he had declassified a damning report on the responsibility of the prince in this murder.

In Jeddah, Joe Biden said he warned the Crown Prince of Saudi Arabia of a “response” from him if further attacks on dissidents were to occur, calling Khashoggi’s killing “scandalous”.

“I just made it clear that if something like this happens again, they will have this answer and more,” he told reporters, saying he brought up the matter “at the very beginning” of the meeting with MBS. . The Saudi authorities have always denied direct responsibility for the crown prince in this murder.

The journalist’s widow, Hatice Cengiz, posted a tweet with a screenshot of her late husband’s account: “Is this how you hold my killers to account as promised? “. “The blood of MBS’s next victim is on your hands,” it added, along with a photo of the fist check Mr. Biden gave the Saudi prince. Joe Biden’s visit has been particularly criticized by human rights defenders, with the powerful Gulf monarchy accused of serious violations and fierce repression of its opponents.

Beyond human rights issues, among the objectives of Joe Biden’s tour are attempts to bring Saudis and Israelis closer together. During his speech in Jeddah, Joe Biden announced that international peacekeeping forces, including American troops, will leave Tiran, one of the two strategic islands, with Sanafir, located in the Red Sea, between Egypt, Israel and Saudi Arabia.

The departure of this force, installed for forty years, must occur “by the end of the year”, said the White House in a document, after Israel indicated that it had “no objection” to the transfer from the two islands of Egypt to Saudi Arabia. At the same time, Riyadh announced the opening of its airspace to “all carriers”, including Israelis, a “historic” decision for Joe Biden.

These two initiatives could, according to analysts, pave the way for a possible rapprochement between Saudi Arabia and Israel, a country which notably normalized its relations in 2020 with two other Gulf countries: the United Arab Emirates (UAE) and Bahrain. The Saudi announcement came ahead of Mr. Biden’s unprecedented Tel Aviv-Jeddah direct flight, the first of its kind from Israel to Saudi Arabia that does not officially recognize the Jewish state. His predecessor, Donald Trump, flew in the opposite direction, from Saudi Arabia to Israel.

On Saturday, Mr. Biden will take part in a summit of leaders of Gulf Arab monarchies also attended by other Arab leaders, who began arriving on Saturday evening. An opportunity to push the normalization initiated by Israel with several Arab countries, in particular with the aim of facing Iran. However, Riyadh conditions the establishment of official ties with the Jewish state to a resolution of the Palestinian question, regularly denouncing the occupation and colonization of the Palestinian territories.

News Editor - July 16, 2022 0
It has been around for a few years but fails a little despite its constant progress. After having tasted the joys of a podium...