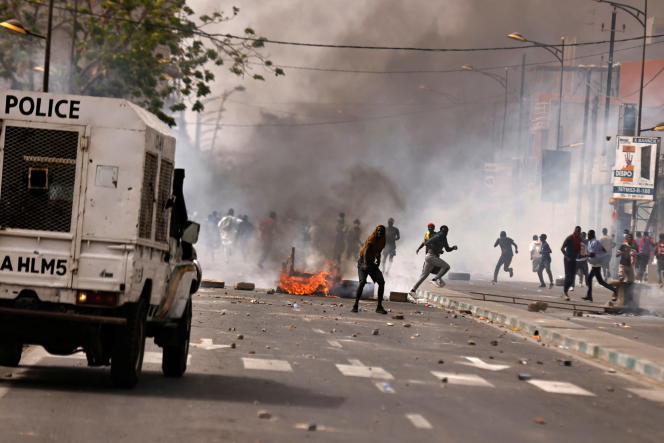 A Dakar court on Tuesday (June 28) sentenced an opposition MP to a suspended six-month prison sentence for defying a ban on demonstrations and releasing another MP in the same case, in a climate of pre-election tension.

Opposition deputies Déthié Fall and Mame Diarra Fame were tried by the Dakar High Court with 82 other defendants, who were all released. They had been arrested on June 17, during a demonstration called for by the opposition which had been banned by the authorities due in particular to “risks of unrest”.

Dakar and Casamance (south) were the scene of clashes that day that left three dead, according to the opposition, which had estimated the number of people arrested across the country at 200 and demanded their release.

MP Déthié Fall “constantly acknowledged having been the main organizer” of the June 17 demonstration. “He should be given a six-month suspended sentence and a fine of 100,000 CFA francs [152 euros],” said court president Ahmed Bâ.

When they arrived at the court on Monday morning, the deputies Fall and Fame had been cheered by the public who had come in large numbers to support them. The main opponent, Ousmane Sonko, was also present among several executives of his movement, noted an AFP journalist.

“I reject all these facts of which I am accused,” claimed Déthié Fall. “I didn’t participate in the protest because it didn’t exist. We are in Senegal. The right to demonstrate is enshrined in the Constitution,” added the parliamentarian.

“I was going to see Barthélémy Dias, mayor of Dakar and opposition figure, “with my two children and I found myself in a gendarmerie van. Now you have to tell me if, in Senegal, the laws prohibit going to see friends, relatives or acquaintances, ”pleaded Mame Diarra Fame. Both deputies claimed to have been “kidnapped” with “no respect” for their office.

In addition, an opposition mayor, Ahmed Aïdara, who heads the commune of Guédiawaye (suburb of Dakar), was given a one-month suspended sentence on Monday for having also defied the ban on the June 17 demonstration, by the court. of Pikine, a neighboring town.

Tensions have been growing in Senegal since the Constitutional Council confirmed the invalidation on June 3 of the national list of holders of the Yewwi Askan wi coalition for the legislative elections of July 31. Opponent Ousmane Sonko, third in the 2019 presidential election and declared candidate for that of 2024, and other opposition figures find themselves excluded from the race.

The opposition is calling for the list to be reinstated and has threatened to prevent the elections from being held. She called for a new demonstration on Wednesday. Many civil society organizations have called on the opposition and the authorities in recent days for dialogue and restraint to avoid an escalation.