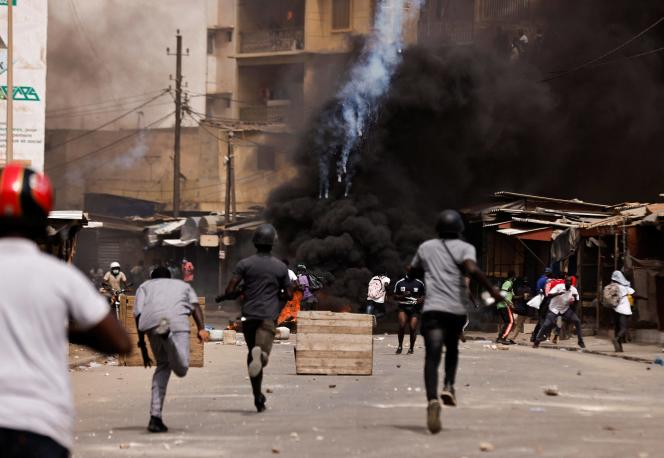 Burned tires, burning trash cans, tear gas … Several major arteries in Dakar were the scene of clashes between young people and the police on Friday June 17, while the political climate is hardening a month and a half legislative elections in Senegal. The escalation was feared since the authorities banned a large demonstration called by the opposition on Wednesday to protest against the invalidation of a national list of candidates from the Yewwi Askan Wi (YAW) coalition for the July 31 poll. .

“Why won’t the power let us demonstrate? This right is guaranteed by our democracy,” protests Amadou Gueye, 27, who had already taken to the streets in March 2021, after the arrest of Ousmane Sonko, an opposition leader. The questioning of this political figure in a case of alleged rape had triggered several days of popular uprising in Dakar and other major cities of the country which had resulted in a dozen deaths.

The police also surrounded the opponent’s home on Friday, preventing him from going to demonstrate but also from going to the mosque to pray. The mayor of Dakar, Barthélémy Dias, another opponent of Senegalese President Macky Sall, also found himself blocked at his home by the police, while three opposition figures, Déthié Fall, Ahmet Aidara and Mame Diarra Fame, were arrested, according to Mr. Sonko’s party.

At the same time, clashes broke out in different parts of the city. A Total station was even ransacked in the commercial and popular district of Colobane according to several Senegalese media. “President Macky Sall wants to go to the elections alone without opponents but we are not going to accept it. This is only the beginning of the demonstrations, we are ready to mobilize until the legislative elections, ”says Lamine Diémé, his shoulders covered with a Senegalese flag.

Exchange of stones for tear gas

According to the Senegalese Red Cross, at least one young person died in Dakar following the fire of a barrack in Colobane, where the exchange of stones for tear gas lasted much of the day. The scuffles reportedly injured around 20 people. Despite the ban, a protest march also took place in Ziguinchor, the capital of Casamance (south) of which Ousmane Sonko is the mayor, in a climate of violence. The press and the opposition report two deaths in Casamance, one in Zinguinchor, the other in the town of Bignona.

In addition to the anger aroused by the rejection of the opposition list for the legislative elections, the demonstrators denounce the intention attributed to President Macky Sall to run for a third term in 2024 and protest against the high cost of living, while prices have been soaring for years. months, in the wake of the war in Ukraine.

However, the desire to do battle is not unanimous in public opinion. “We have other remedies to deal with the problem. These clashes are harmful to our democracy, ”says Séni Thiaw, 37, a resident who came out to watch the clashes from afar without taking part. In a statement issued Friday evening, the majority coalition Benno Bokk Yaakar (BBY) praised the “democratic maturity” of the people, “who did not respond to the insurrectionary call of the YAW coalition” and welcomed of “the effectiveness of public action in enforcing the law”.

“A Question of Democracy”

Speaking in the middle of the night from his home, Ousmane Sonko lashed out at Macky Sall “who wants to keep political opponents out of any competition”, saying the three death toll was “the sole and exclusive responsibility of Macky Sall”. “It’s not just a question of list but of democracy”, decreed the opponent in a long speech in French then in Wolof.

The opposition has constantly denounced the invalidation of the national list of the YAW coalition, led by Mr. Sonko’s party, as a ploy by President Macky Sall to ward off his opponents. In fact, this rejection excludes Mr. Sonko and certain opposition figures from the legislative elections and the power has so far given no sign of wanting to compromise.

This political deadlock a few weeks before the election worries Alioune Tine, observer and human rights defender. “These events reflect a degeneration of Senegalese democracy. Having such problems when submitting the lists means that our electoral system is not working properly,” he says. The day before the demonstration, the Association of Imams and Ulemas in Senegal had expressed its concerns, and raised the option of postponing the elections.

According to Alioune Tine, the radicalization of an opposition which is now calling for insurrection is first and foremost the result of a lack of political dialogue. “We recommend more restraint. But the situation must also lead the president to speak out in order to move towards peaceful and democratic elections with a minimum of consensus on the rules, ”he continues, recalling in passing that the freedom to demonstrate is a constitutional right.