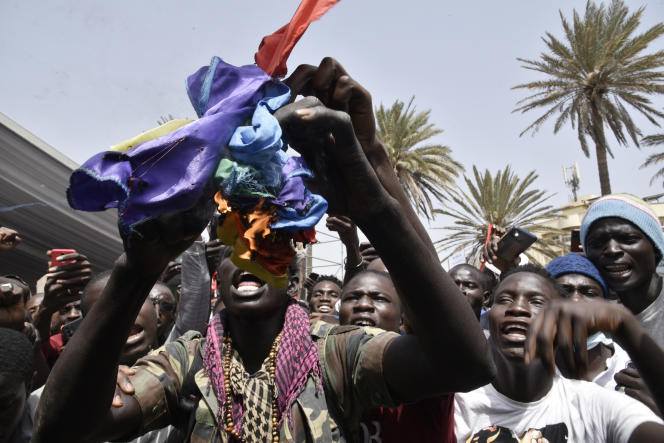 Three men have been arrested and brought before the Senegalese courts after a young foreigner was violently attacked last week by a mob who hurled homophobic insults at him, a police source said on Monday (May 23). The assault occurred on May 17 in the HLM district of Dakar. Videos posted on YouTube and TikTok show an angry mob of several dozen men surrounding a barefoot young man in just a pair of boxers in broad daylight, slapping him on the back and head while yelling at him. homophobic.

According to the Senegalese news site Seneweb, the victim is an American musician who, “because of his style, his clothing”, was “wrongly accused of being a homosexual by ill-intentioned individuals”. He had come to Dakar with a friend and colleagues for the Biennale, an ongoing African contemporary art event in the capital, says Seneweb. The victim and those with him were stripped of their cellphones and personal belongings, according to the site.

A police source interviewed by AFP did not comment on the nature of the attack. But she said that “three individuals were arrested by the police of the HLM district and referred to the prosecution for endangering the lives of others and violence”. She requested anonymity, noting the “sensitivity of this case”. “The victim is safe and sound, she has returned to her home,” the source added, adding that the victim’s country of origin had insisted on the “confidentiality” of the case. Asked by AFP, the American embassy in Senegal did not speak.

The assault came amid controversy surrounding Senegalese footballer Idrissa Gana Gueye, a Paris-Saint-Germain player, after he refused to join the fight against homophobia by wearing a rainbow jersey during a match in France.

“People want to take justice into their own hands”

Alexandre Marcel, president of the Idaho France committee, an association helping persecuted members of the LGBTI community, particularly in Africa, urged Monday for the protection of homosexuals in Senegal. “When you are LGBTI today in Senegal, you are in danger because the people want to take justice into their own hands. LGBTI are fleeing and not a day goes by without us receiving a call for help or relief from Senegal,” he told AFP.

In this 95% Muslim and very practicing country, homosexuality is widely considered deviant. Senegalese law punishes with one to five years in prison so-called acts “against nature with an individual of his sex”. Homosexuality is also willingly decried as an instrument used by Westerners to impose values ​​foreign to Senegalese culture and traditions.

In a column published by the press, Abdou Latif Coulibaly, secretary general of the Senegalese government, believes that “the desires and demands of the powerful LGBT lobby cannot be orders for all humanity”. Idrissa Gana Gueye is affected by “hysteria” and an “injustice that we want to inflict on him by forcing him to do an act that offends his conscience”, he says.

Abdou Latif Coulibaly attacks in particular the letter by which the French Football Federation summoned the player to explain himself. “A colonial governor couldn’t have been worse in summoning a ‘native’,” he said. He wonders if the West has not “simply and collectively lost its mind” and asserts that this West does not realize that a part of humanity on which it would impose its will, including by force , is “better prepared to resist”.