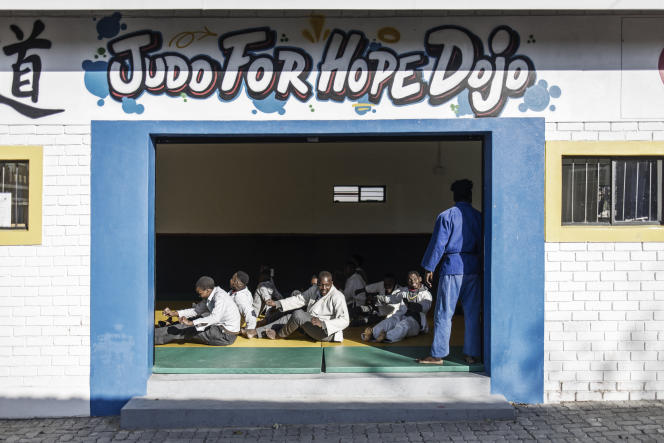 In a recently renovated white building in Alexandra, one of South Africa’s most impoverished townships, around 20 children do somersaults on the tatami, some still in school uniform, under the watchful eye of a trainer.

This is the first time that this poor neighborhood in the north of Johannesburg, regularly hit by xenophobic attacks, has seen a dojo appear. Coming from a neighboring primary school, these children are there to “learn to live together”, explains to AFP Roberto Orlando, coordinator of the organization Judo for peace, present in several countries. Athletic, with piercing blue eyes, Roberto is originally from Italy but has traveled to Ethiopia, Somalia and the Democratic Republic of Congo (DRC), creating dojos in underprivileged communities along the way.

“The goal of the program is to use judo as a way for refugees, migrants and South Africans to meet each other,” he says, dressed in a blue judogi. According to him, in a neighborhood like Alexandra, which has many migrants and is densely populated, this kind of education is necessary. At the heart of his philosophy, an arm’s length list of values ​​such as self-control, discipline, respect, honor, courage. In a few words, “the moral code of judo”.

South Africa is occasionally plagued by xenophobic outbreaks. During the violence that killed more than 60 people in 2008, Alexandra was a hotbed of attacks. In 2015, another episode, the murder in the middle of the street of Emmanuel Sithole, a Mozambican street vendor, made an impression.

“You get to know other cultures”

Years later, the scourge of xenophobia has still not left the township and the attacks on “outsiders” are repeated. Since the beginning of the year, an anti-migrant group called “Dudula” (“pushing back”, in Zulu) has gained momentum. Demonstrations and operations to drive out illegal migrants have multiplied. Once again, Alexandra is a seat of the movement.

So having a Congolese refugee among your coaches is a “symbol”, loose Roberto Orlando. He also hopes one day to hand over to the latter, Rudolph Ngala. Aged 21, the young coach left Kinshasa in 2017. He did not speak a word of English. With judo, “you train with people from different backgrounds, you get to know other cultures,” he says.

Ahead of World Refugee Day on Monday, June 20, Judo for Peace gathered its apprentice judokas in a dojo, this time created in an emblematic building in the center of Johannesburg infamous for its high crime rate, Ponte City. A sort of urban slum until the early 2000s, this tower is slowly being rehabilitated.

Standing with other young people, willingly joking, Denzel Shumba, 17, says he came from Zimbabwe with his family ten years ago. “South Africa is a difficult country because of xenophobia,” he admits, regaining his seriousness. He says he’s scared sometimes, “we don’t play just anywhere.” Judo instilled in him calm, respect and also taught him to be more peaceful. Something that Roberto Orlando considers a small victory.