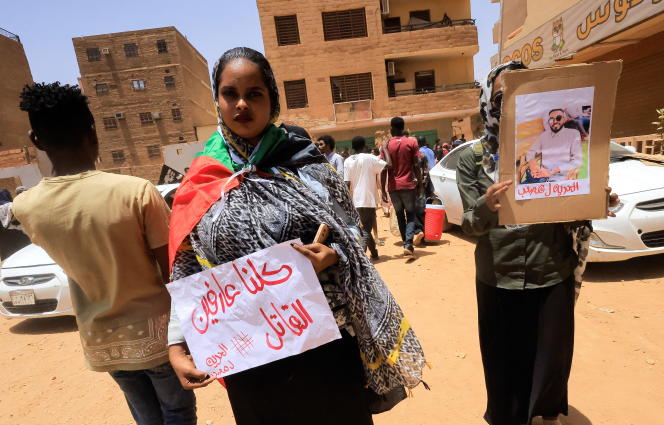 On Sunday May 29, General Abdel Fattah Al-Bourhane lifted the state of emergency he had imposed on Sudan during his putsch of October 25, 2021. The same day opened in Khartoum the trial of four demonstrators, including an icon of the protest against the military.

General Bourhane, who had his civilian partners arrested, dismissed the transitional government and imposed a state of emergency during his coup, is under fire from the criticism of the international community, which makes the return of civilians to the power the sine qua non for the resumption of aid to the country, one of the poorest in the world. She is also calling for an end to a crackdown that has already left a hundred deaths in the ranks of pro-democracy demonstrators and hundreds of arrests.

General Bourhane “has issued a decree lifting the state of emergency throughout the country,” the council he heads said in a statement. It is an outstretched hand “to create the atmosphere necessary for a fruitful and meaningful dialogue for stability during the transition period”.

The transition to democracy was launched in 2019 in Sudan, when soldiers and civilians agreed to share power for the time to lead the country to its first democratic elections after thirty years of military-Islamist dictatorship of Omar Al-Bashir, dropped by the army under pressure from the street. It was interrupted by the putsch of General Bourhane, who now pleads for a dialogue with all the political forces, which he already calls on to make “concessions”.

The United Nations and the African Union – which has suspended Sudan – are also pleading for a political dialogue, on pain of seeing the country sink definitively “economically and in terms of security”, when already, according to the UN, a Sudanese out of two will suffer from hunger by the end of 2022. Scarred by the October coup, the anti-coup demonstrators refuse any dialogue with the military.

“The Trial of the Revolution”

On Sunday, the trial of four protesters detained for four months for the death of a police general opened in Khartoum. Hundreds of Sudanese brandished their portraits outside the courtroom, an AFP journalist noted. Mohamed Adam, a young anti-coup icon, nicknamed “Tupac” by the street, appeared alongside his co-defendants, Mohamed Al-Fattah, Ahmed Al-Nanna and Mossaab Al-Sherif. Fists in the air, “V” for victory and a broad smile, they saluted their people as they got out of the police van.

The next hearing will take place on June 12, announced judge Zouheir Osmane, who asked the forensic doctor for a report on possible torture when the four young people had gone on a hunger strike in March to protest against “inhuman treatment”. and “police brutality”. “This trial is not only that of four revolutionaries, it is that of the revolution,” wrote the popular committee of the restless neighborhood of Bourri, in Khartoum, calling for “not to let the counter-revolutionary forces regain control of the state, whatever the cost”.

This trial is emblematic in Sudan, where the police have announced only two deaths in their ranks, including this police general who was stabbed to death, according to them, in the chaos of the dispersion, in January, of one of the many anti-demonstrations. -putsch. Several dozen of his relatives were also in court on Sunday, holding banners calling for “revenge.”

On Saturday, two new demonstrators were killed in anti-coup protests. The UN envoy to Sudan, Volker Perthes, said it was “time to stop the violence and end the state of emergency”. On Sunday, shortly before he lifted the state of emergency, General Bourhane had received senior officers who called on him to release the demonstrators arrested under the emergency laws and to return his accreditation to Al- Jazeera Live, according to his office. This Qatari channel, banned in January, had been accused by the authorities of “unprofessional coverage” of the demonstrations.