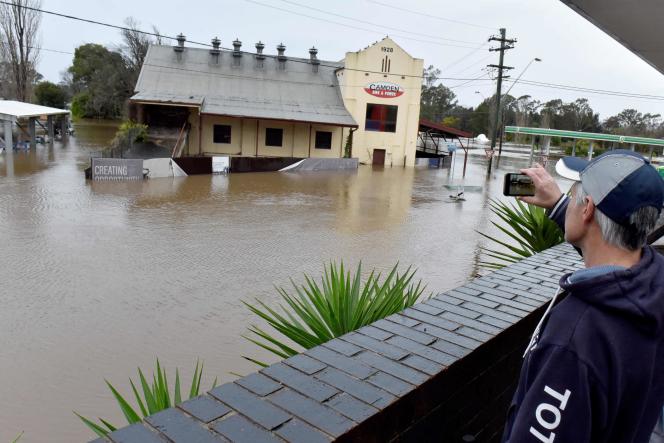 Australia is particularly affected by climate change. Thousands of Sydney residents were called to evacuate their homes on Monday (July 4th) on the third day of torrential rains as swollen rivers submerged swaths of land and torrents of water poured out of the main dam in Australia’s largest metropolis.

Around 32,000 people have received an evacuation order or warning, depending on the case, in the state of New South Wales, the emergency services said. “The ground is saturated, the rivers are flowing fast, the dams are overflowing,” said Carlene York, a state emergency services official.

On Monday, emergency services said they had assisted more than 80 people since the previous evening. Many people were trapped in their cars trying to cross flooded roads or were stranded in their homes surrounded by rising waters.

By Monday morning, the river’s muddy brown waters had turned a large swath of land into a lake in the suburb of Camden, south-west of Sydney. Broadcast on television channels, images showed roads that had disappeared under water and mobile homes in the water, including at least one overturned on its side.

The rains could persist for twenty-four hours

Large volumes of water have gushed from the pressurized Warragamba Dam, which supplies the majority of the city with drinking water. Forecasters say torrential rains in New South Wales could persist for at least another 24 hours.

Off the coast of Sydney, rescuers try to come to the aid of a 150-meter-long freighter with 21 crew members on board. A plan to airlift crew members had to be postponed for safety reasons, police say.

The east coast of Australia has suffered repeated flooding over the past eighteen months. In March, flooding caused by severe storms devastated Western Sydney and claimed twenty lives.

As the planet warms, the atmosphere contains more water vapour, increasing the chances of heavy rainfall, scientists say. These rains, combined with other factors, linked in particular to land use planning, favor flooding.

“Our research into the March 2021 floods in Sydney revealed that the frequency of similar events over Sydney was likely to increase by 80% by the end of the 21st century,” said Kimberley Reid, the atmosphere at Monash University.

“There is no doubt that these events are becoming more frequent. Governments need to adapt and ensure we respond to the changing environment in which we find ourselves. »

United States: protests after the video of a black man riddled with bullets by the police, in Akron

News Editor - July 4, 2022 0
In service over a 30 kilometer section between Montmarault and Chemilly, in the Allier department, the A79 is the first motorway in France with...

In Sydney, thousands of residents called to evacuate their homes because...

United States: protests after the video of a black man riddled...