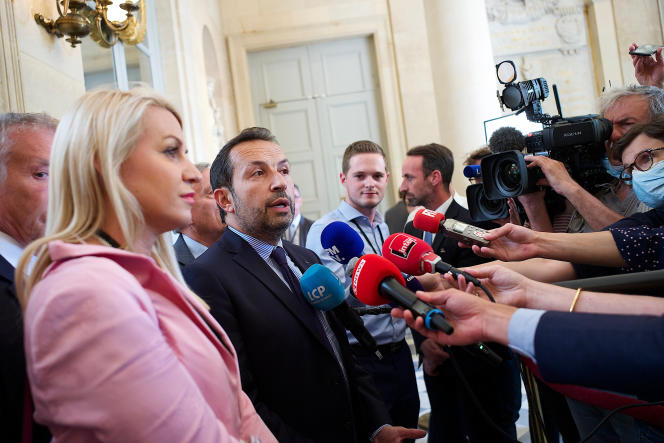 The deputies of the new National Assembly proceeded to the election of the office of the Palais-Bourbon, Wednesday, June 29, the day after the arrival of the deputy of Yvelines Yaël Braun-Pivet to the presidency of the institution. Six posts of vice-presidents, three posts of quaestors and twelve places of secretaries were to be filled to allow parliamentarians to begin their legislative work – the election of the offices of the eight standing committees on Thursday will be the final step.

After a controversy in 2017 over the allocation of a quaestor position to the opposition, the majority had revised the rules, establishing a points system depending on the position to be filled. Put to the test for the first time, the new rules did not lead to an agreement. Despite a three-hour meeting of the Conference of Presidents in the morning, the situation at the beginning of the afternoon amounted to “the most complete disorganization when they could have quietly reached a balanced division”, lamented Bertrand Pancher , co-president of the independent group Freedoms, independents, overseas and territories.

All the positions had to be voted on in public session, from 3 p.m., the number of candidates being greater than the number of places available. The deputies Sandrine Rousseau and Benjamin Lucas have, in fact, added their candidacy for the vice-presidency in extremis, “to block the far right”, they justified. The two candidates ultimately only received around thirty votes.

Thus, six vice-presidents have been elected and will have the mission of relaying the president to lead the sessions: Valérie Rabault (Socialist Party), Caroline Fiat (La France insoumise), Elodie Jacquier-Laforge (Democrat), Naïma Moutchou (Horizons) , Sébastien Chenu and Hélène Laporte (National Rally). The elected socialist will occupy the post of first vice-president. “Tambouille”, “denial of democracy”, “sordid tricks”: the deputies of the New Popular and Social Union denounced, after the results, an agreement which, according to them, would have had the objective of marginalizing the left.

Elected to the vice-presidency with 290 votes for Mr. Chenu and 284 votes for Ms. Laporte, the RN candidates mathematically benefited from the votes of the presidential majority and the right since the RN group has only 89 members. Benjamin Lucas thus spoke of “a sad day for the Republic and its values” at the microphone of The Parliamentary Channel.

Marie Guévenoux and Eric Woerth (Renaissance), as well as Eric Ciotti (Les Républicains) were then elected Quaestors, in charge of the finances of the Assembly. The latter recovers the position reserved for the opposition, to the chagrin of MP Annie Genevard, who wanted Les Républicains to benefit from a vice-presidency as a key position and thus be able to continue to chair debates like this was the case in the previous legislature. The elected official expressed her dissatisfaction via Twitter, judging that “arithmetic has a good back” and that “the majority is alone against Nupes and RN”.

Faced with accusations of negotiations between Renaissance, LR and RN to distribute the positions, Aurore Bergé, president of the majority group in the Assembly, returned the ball to the Nupes camp. “They wanted to run two green candidates who didn’t even get votes from their entire intergroup, they didn’t even vote for their own candidates, it’s kind of amazing,” she responded. .

At the end of the day, the office of the National Assembly was completed with the election of the twelve secretaries of the office. Seven deputies from the majority and three deputies from the Nupes were elected, alongside an elected representative from Les Républicains and an elected representative from the Libertés, Indépendants, Outre-mer et Territoires group.