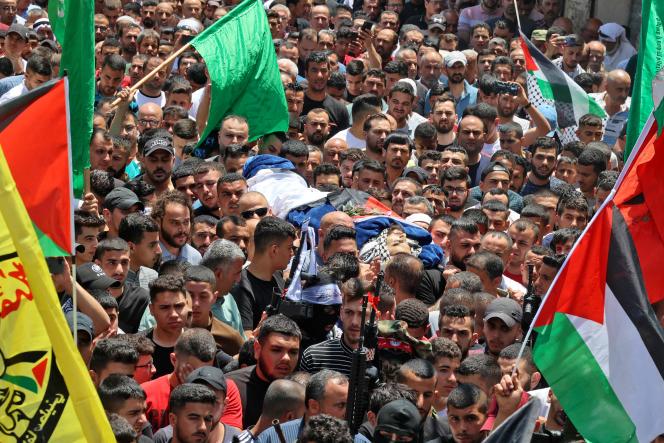 A young Palestinian man was shot and killed Thursday (June 2nd) during clashes with the Israeli army in the occupied West Bank, the Palestinian health ministry said. “A 17-year-old Palestinian boy who was injured by an Israeli army bullet in the village of Al-Madia, in the Ramallah area, died of his wounds,” the ministry said in a statement. .

The Israeli army, meanwhile, said on Twitter that it fired at suspects who threw incendiary bottles at soldiers in the area near the separation barrier, near the village of Al-Madia. Three other Palestinians have been killed in the past two days in skirmishes in the occupied West Bank, where the Israeli army continues its almost daily operations after a series of attacks in Israel.

On Wednesday morning, a Palestinian woman was shot dead near Al-Aroub Palestinian refugee camp in the southern West Bank because she approached a soldier, the Israeli army said, armed with a knife . Two other people were killed between Wednesday evening and Thursday morning during Israeli army operations in this territory, occupied since 1967 by the Jewish state.

In Yabad, a village near Jenin (north of the West Bank), the Israeli army destroyed, in the night from Wednesday to Thursday, the house of the family of the author of the attack which had killed five people in the city ​​of Bnei Brak, Israel, on March 29. During the operation, “violent riots broke out” and the soldiers, targeted with Molotov cocktails and gunfire, responded and fired live ammunition, the IDF said. Six Palestinians were injured in the clashes and one died of his wounds in hospital, the Palestinian health ministry said.

Then on Thursday morning, a 29-year-old Palestinian was killed by Israeli security forces in a refugee camp near Bethlehem in the southern West Bank, the ministry said again in a statement. According to the IDF, soldiers operating in the camp to arrest a Palestinian “suspected of terrorist activities” were targeted by “explosive devices and rocks”. They responded by firing live ammunition.

On Thursday, the funerals of the victims in Bethlehem and Yabad were attended by hundreds of people, and fighters wrapped the bodies with banners of Palestinian armed factions, according to journalists from Agence France-Presse (AFP) on square.

Nineteen dead in Israel since the end of March

Palestinian presidential spokesman Nabil Abu Rudeineh accused Israel of being behind the “recent escalation” of tensions and called on the United States to pressure Israelis to end these tensions. operations in the occupied West Bank, “which risk drawing the whole region into violence”.

Thirty-eight Palestinians and three Israeli Arab attackers were killed there, partly members of armed groups, but also civilians, including a journalist covering an operation in Jenin. An Israeli policeman was also killed in an operation in the West Bank.

Revival: “Variety”, nugget of independent cinema in the “no wave” New...

News Editor - June 3, 2022 0
All it took was for the repertoire sector to take a look at the buried history of women directors for a host of nuggets...