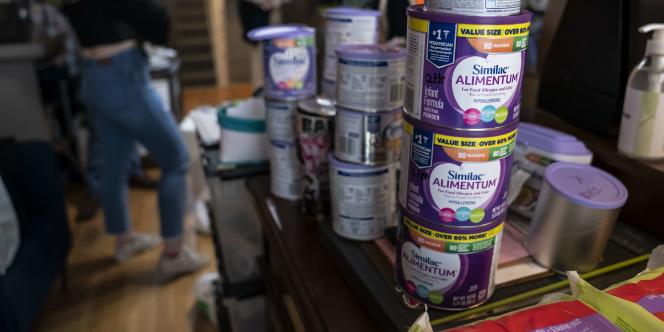 Empty shelves and anxious parents: the White House assured, Thursday, May 12, to take very seriously the shortage of baby milk that the United States is experiencing, and which is turning into a political crisis for the president, Joe Biden.

According to data provider Datasembly, the out-of-stock rate for this product reached 43% at the end of last week. Since the shutdown in February of a factory of the manufacturer Abbott, the situation has only worsened.

On February 17, after the deaths of two babies, Abbott announced a “voluntary recall” at its Michigan plant of powdered milks, including Similac, used by millions of American families. The investigation cleared the affected milk but production has still not resumed, compounding the shortage already caused by broader supply chain and labor shortage issues.

Accused at worst of indifference, at best of wait-and-see attitude, the White House set out a few measures on Thursday, of limited scope. “It’s a job that has been going on for months,” said his spokesperson, Jen Psaki, when asked about the reaction time of the American executive. “Our message to parents is: we heard, we want to do everything we can,” she also said.

The Biden administration plans in particular to increase imports, while the United States produces 98% of the formula milk it consumes. In addition, Ms. Psaki said she was working with the States to ease the administrative burden on the poorest families who buy infant milk using food stamps. Finally, the White House seized the competition authority on the abuses linked to this situation of shortage, in particular the resale of infant milk online at exorbitant prices.

Ms Psaki added that another option still under consideration was to invoke the Defense Production Act, a legacy from the Cold War, which allows the US president to make economic decisions by executive order. Mr. Biden also spoke Thursday with retail representatives and baby milk producers, conversations described as “encouraging” by an administration official. But the White House did not risk predicting a way out of the crisis, while the Republican opposition, campaigning for the midterm elections in November, seized on the subject and pounded the administration. Biden.

Elise Stefanik, elected Republican in the House of Representatives, said at a press conference that she contacted the federal authorities in February: “Joe Biden has no plan. (…) When we asked the White House about the shortage, they laughed. Randy Feenstra, a Republican elected official from Iowa, assured that in his area, families “are going 50, 75, up to 100 miles [80 to 160 kilometers] to try [to] find » powdered milk.

Down to Democratic House of Representatives boss Nancy Pelosi, who let her frustration shine through on Thursday: “Right now, babies are hungry, babies are crying, we have to respond to this situation now. »

Sara Khan, mother of three children aged 10, 7 and 6 months, told Agence France-Presse (AFP) of her distress at the empty shelves in Washington. “As soon as my baby was born, I noticed that there was a problem,” says Sara Khan, who held on thanks to boxes of milk sent by post from her family and friends.

The situation is even more distressing for parents of children whose health requires special milks. So Maya, 3 weeks, lactose intolerant. “We had little choice but to switch to plant-based milk,” for lack of an alternative, says her father, Steve Hohman, who lives in San Diego, California.