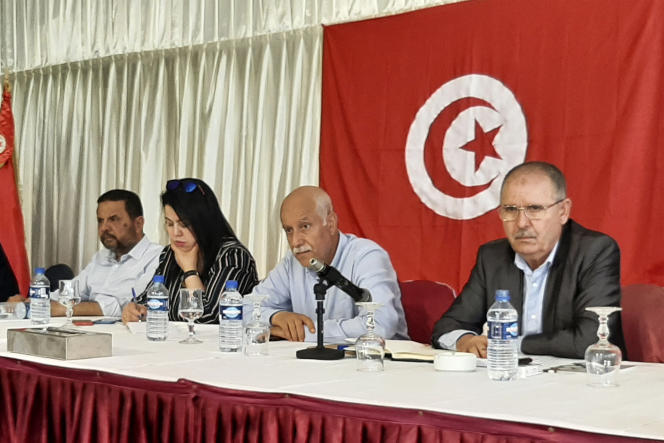 The powerful Tunisian trade union center UGTT refused on Monday May 23 to take part in the dialogue proposed by President Kaïs Saïed with the aim of founding a “new Republic” after having assumed full powers in July 2021.

Mr. Saïed on Friday appointed a jurist close to him – Sadok Belaïd – to head a commission to draft a Constitution for “a new Republic” through a “national dialogue” from which political parties are excluded.

According to a presidential decree, this commission will present “a draft Constitution” to the president. It will do so after holding a “national dialogue”, to which the unions the Tunisian General Labor Union (UGTT) and the Tunisian Union of Agriculture and Fisheries (UTAP), the organization employers’ association Utica, the NGOs the Tunisian League for Human Rights (LTDH) and the National Union of Tunisian Women (UNFT).

But at the end of a meeting of the governing body of the UGTT on Monday under the chairmanship of its secretary general Noureddine Taboubi, the trade union center inflicted a snub on President Saïed by announcing that it would boycott the proposed dialogue.

“Not up to the crisis”

The UGTT “will not participate in the national dialogue in the format proposed by President [Kaïs Saïed], which has not been the subject of prior consultations and does not meet the expectations of the national forces to set up a patriotic process allowing out of the crisis,” the trade union center said in a statement.

The UGTT believes that this dialogue aims to “endorse conclusions decided unilaterally in advance and force them to pass as accomplished facts”. For the trade union center, “not only is this dialogue not likely to get the country out of the crisis, but it risks aggravating and prolonging it”.

“This dialogue is not up to the crisis Tunisia is experiencing and does not chart a better future,” Taboubi told reporters after the meeting. “We call for a real national dialogue because the one currently proposed excludes important political components in the country,” he added.

An influential player on the political scene in Tunisia, the UGTT received – along with the Utica, the LTDH and the National Bar Association – the Nobel Peace Prize in 2015 for its contribution to the democratic transition in Tunisia, the cradle of “Arab Spring” where democracy seems to be faltering since Mr. Saïed’s coup in July.

Mr. Saïed announced in early May the establishment of a “national dialogue” expected for months, while attacking the political parties he accuses of having looted the country in recent years. In a roadmap supposed to get the country out of the political crisis, Mr. Saïed has scheduled a referendum on constitutional amendments on July 25, before legislative elections on December 17.

After months of political blockage, Mr. Saïed, elected at the end of 2019, assumed full powers on July 25, 2021 by dismissing the Prime Minister and suspending the Parliament dominated by the Islamist-inspired party Ennahda, his pet peeve, before disbanding it in March. In addition to the political stalemate, Tunisia is experiencing a severe socio-economic crisis and is in talks with the International Monetary Fund (IMF) in hopes of obtaining a new loan.

“Prehistoric Planet”, on Apple TV: a trip to the time of the dinosaurs with stunning realism

News Editor - May 24, 2022 0
Paris-Saint-Germain (PSG) women's coach Didier Ollé-Nicolle has been "temporarily laid off" while investigating "inappropriate facts and remarks" against him, the club announced. Tuesday, May...

Strike at the RATP to denounce the opening to competition: traffic...

“Prehistoric Planet”, on Apple TV: a trip to the time of...

Roland-Garros: a good fight and a defeat, the successful farewell to...