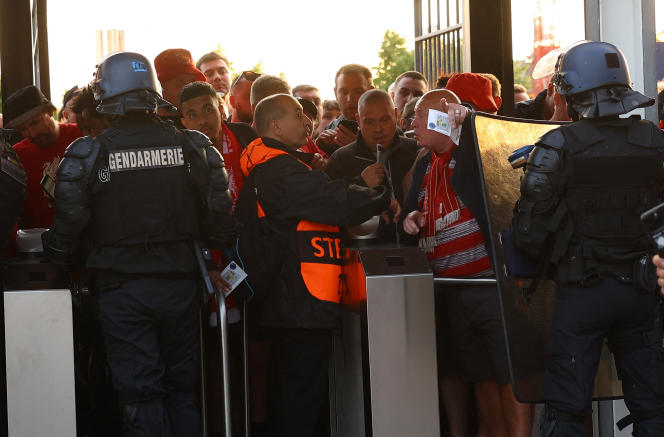 “There is a contradiction between the renunciation of supervising the movements of fifty or one hundred and fifty supporters of French football clubs and the claim to organize a Champions League final. For Ronan Evain, executive director of the Football Supporters Europe federation, the excessive use of prefectural orders prohibiting or restricting movement has led to a loss of know-how among the police.

“With such frequent use of these bans, they no longer know how to manage large groups,” confirms sociologist Nicolas Hourcade, a specialist in supporterism. Denounced by the National Association of Supporters (ANS), regularly successfully challenged in court – but months later – these orders invoke often fanciful reasons: sales in the city center, garage sales or kite competitions.

Sometimes hastily copied and pasted from an earlier version, they testify to the choice of the public authorities to mobilize at least the police force to supervise the migration of supporters. At the beginning of May, the ANS counted 126 for the current season, a good third of the Ligue 1 matches concerned.

Every weekend, however, tens of thousands of fans cross the United Kingdom and Germany and contribute to the positive image of their national championships in full and festive stadiums. The serious unrest during the Euro final, in July 2021 at Wembley Stadium in London, and the resurgence of incidents in the Premier League are nevertheless a reminder that the problems have not disappeared. But in view of the endemic hooliganism of the 1980s and 1990s, the policies put in place have borne fruit.

“England and Germany, faced with a high level of violence, have implemented a reflection, global and coherent strategies which have obtained positive results”, explains Nicolas Hourcade. By favoring dialogue and discernment: “These two countries have opted for very strong repression against violent and racist individuals, while promoting positive supporterism. The police forces take care to distinguish problematic individuals, and to provide others with a benevolent welcome, with very strong communication in order to preserve a peaceful relationship. »

Precisely what was missing on Saturday May 28 in Saint-Denis, in addition to an adequate understanding of the flow of spectators? French-style management of supporters is in line with national police doctrines, suggests Sébastian Roché, a sociologist specializing in security issues: “The prefect Didier Lallement does not hide that he is only interested in maintaining order, not managing crowds. Accustomed to considering traveling supporters as a danger, “the police feel threatened and treat them badly, indiscriminately”, supports Nicolas Hourcade.

“It is difficult to reconcile a position of confrontation and an aptitude for dialogue”, summarizes Sébastian Roché. Present at the Stade de France as an observer accredited by UEFA, Ronan Evain noticed that “the mobile gendarmes were not even equipped with megaphones to give information to supporters who were blocked and crowded together for hours. The emphasis was on strength, with an ostentatious presence. »

The institutions themselves lend themselves to dialogue with more or less goodwill. The ANS believes that the National Support Authority, created in 2017 to “contribute to the dialogue between supporters and other sports actors”, is neglected by the Ministry of Sports and the National Division for the Fight against Hooliganism.

The DNLH, whose missions have always been vague according to Ronan Evain, carries confusion in its very name: according to the admission of its boss, Commissioner Thibaut Delaunay, hooliganism is “residual” in France…

For its part, the Disciplinary Committee of the League applies a policy of collective sanctions (matches behind closed doors and closed stands), while the serious incidents of August and September 2021 in the league (xxxx to xxxx and xxxx) have rather advocated for targeted measures. Despite all the sanctions taken against the “ultras” of Saint-Étienne, the relegation match on Sunday evening was the scene of the worst excesses of the season.

In June 2020, a parliamentary report led by MPs Marie-George Buffet (PCF) and Sacha Houlié (LRM) had however diagnosed the failure of “the policy of all repression”. Which ends up compromising the country’s ability to organize major sporting events.