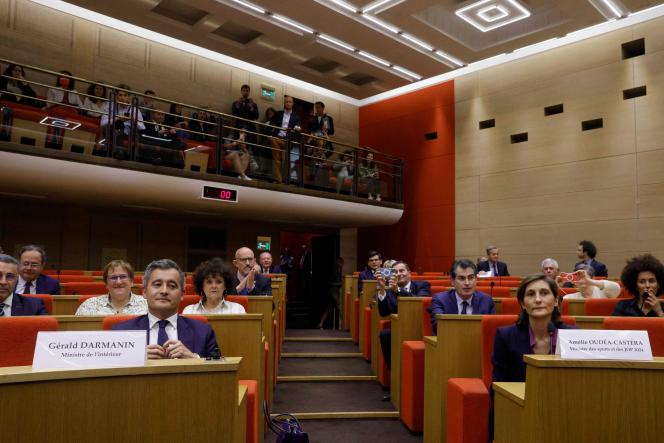 An audition and a timid beginning of mea culpa. But no substantive change. Wednesday, June 1, before the Senate Law Commission, Gérald Darmanin and Amélie Oudéa-Castéra were invited to make “all transparency” on the fiasco of the Stade de France. Since May 28, the scenes of chaos observed around the Dionysian enclosure on the sidelines of the Champions League final between Liverpool and Real Madrid have sparked a political storm and the anger of the British. The Ministers of the Interior and of Sports therefore endeavored to answer, point by point, the questions of the parliamentarians.

They had been strongly encouraged to do so at the end of the Council of Ministers, the same morning, by Emmanuel Macron. The Head of State, who did everything not to be involved in this controversy, considered by his entourage as a poisoned file, on which “there are only blows to take”, had not said a word since Saturday at the Stade de France. Wednesday morning, while the controversy is not deflating, the president finally asked the government “transparency, light on the facts, leads so that it does not happen again and responsiveness”, announced the spokesperson of the government, Olivia Grégoire, even referring to “an obsession” of Mr. Macron.

At the end of the Council of Ministers, Ms. Grégoire, in any case, felt that “we could surely have done better” and said she was “sorry” for the supporters, victims of these incidents. A slight change in tone that contrasts with that, offensive, of the Minister of the Interior, Gérald Darmanin, for four days.

Faced with criticism, from France but also from abroad, the executive is therefore beginning to recognize the dysfunctions, without taking refuge in denial. “When it screwed up, you have to say it screwed up,” said someone close to the head of state. According to the Elysée, “the president immediately understood that it was important and he gave the orders for it to be taken seriously. And that the responsibilities are established, so that it does not happen again”. A way of putting pressure on his Minister of the Interior, forcing him to change his attitude.

“A wound to our national pride”

The message was clearly heard by Mr. Darmanin. “It is obvious that things could have been better organized,” he admitted on Wednesday during his hearing by the Senate Law Committee. “It is obvious that this celebration of sport has been ruined”, he added, before admitting that “the negative image of this match is a wound for our national pride”. “And we very sincerely regret the sometimes unacceptable excesses that have taken place,” said the minister, under fire from the opposition, who demanded his resignation.

The tenant of Place Beauvau even regretted the massive and indiscriminate use of tear gas at the entrance to the stadium, he admitted that it had “caused great damage, especially to children”. “I wanted to apologize very sincerely for this disproportionate use,” said Darmanin, who called for sanctions against two law enforcement officials for violating tear gas rules on Saturday. He also instructed Michel Cadot, interministerial delegate for the Olympic and Paralympic Games (Dijop), to study “different” crowd dispersal methods during major sporting events.

The Minister of the Interior, in whom the President of the Republic maintains “all his confidence”, as Olivia Grégoire recalled at the end of the Council of Ministers, did not, however, express any remorse about the security arrangements for the final. Some senators criticized him on Wednesday for wanting to test certain things in the run-up to the Rugby World Cup in 2023 and the Olympic and Paralympic Games in the summer of 2024. “Could we have anticipated more? No doubt”, he only conceded, regretting, for example, that a note from the National Division for the Fight against Hooliganism (DNLH), dated May 25, alerting to the risk of tens of thousands of supporters of Liverpool without tickets, has not been transmitted to the Paris police chief, Didier Lallement. Before correcting himself, a few moments later: “The DNLH did send this note to the Prefecture of Police. And to clarify that “the content of this note would not have changed anything”.

For the rest, Gérald Darmanin remains straight in his boots: the device for maintaining order has, according to him, made it possible to “save lives”, such as the decision of the prefect Lallement to lift the pre-filtering – a prelude to the scenes of chaos observed on the forecourt of the Stade de France – when the pressure from British supporters in the bottleneck at the RER D exit was too great.

The Minister of Sports, Amélie Oudéa-Castéra, recognized that reflections should be carried out in “the management of flows leaving public transport”, the “coordination between our internal security forces and private security agents” , or even a “better anticipation of measures to fight against delinquency”.

Only 2,800 counterfeit tickets scanned at the entrance

Above all, the Minister of the Interior maintained his accusations against British supporters, whom he holds solely responsible for “the massive, industrial and organized fraud of counterfeit tickets”. However, only 2,800 counterfeit banknotes were actually scanned at the entrance to the Dionysian enclosure.

Before the senators, Gérald Darmanin explained, with figures from the RATP, the SNCF, the European Union of Football Associations (UEFA) or even the French Football Federation in support, how he had assessed, from the end of the match on Saturday, the presence of “30,000 to 40,000 British supporters either without tickets or with falsified tickets”. A ticket would have even been reproduced “744 times”, sees Mr. Darmanin as proof. Arguments which, since Saturday, have revolted the British; they question the dysfunctions of the French authorities in the organization of the final.

“It is only you who have seen these additional supporters”, then challenges Michel Savin, deputy (Les Républicains) of Isère and president of the group Sports practices and major sporting events. The Minister of the Interior says he is ready to provide video surveillance images which would attest, from 10:45 p.m., more than thirty minutes before the end of the match, to the presence on the RER D platforms of a large number of supporters , “including a lot of red jerseys”.

In Nyon, at the headquarters of UEFA, these figures are in doubt. Far from the 30,000 to 40,000 announced by Beauvau, there would have been “only” several thousand, at most, of English supporters around the stadium without tickets or with falsified tickets. Without denying their own responsibility, UEFA executives point, internally, to the disorganization and poor reaction of French law enforcement.

“If technical elements have been provided precisely by the Minister of the Interior, there are still things that do not really stick, argues Jean-Jacques Lozach, socialist senator from Creuse. We are impatiently awaiting the conclusions and recommendations of the Cadot report. The Dijop has ten days to return to the Minister of Sports his observations on the fiasco of the Stade de France. In the meantime, the Senate has decided to continue its hearings.