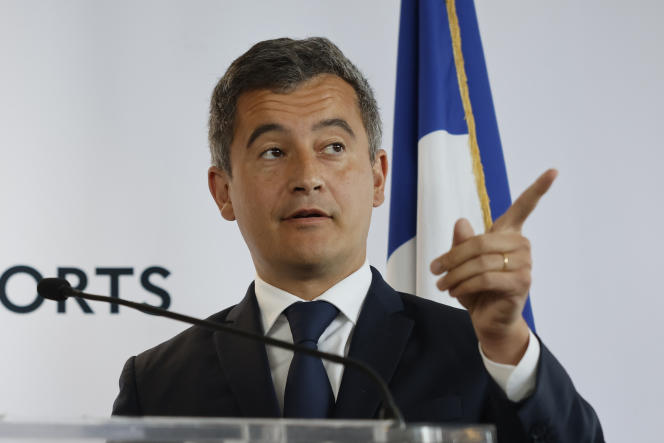 At the end of a meeting of more than two hours on the incidents of the Stade de France which took place on Saturday evening for the final of the Champions League, the Minister of the Interior, Gérald Darmanin, alongside his counterpart in sports, Amélie Oudéa-Castéra, once again rejected the responsibility on the supporters of Liverpool, during a press conference, Monday, May 30.

Citing figures from the Union of European Football Associations (UEFA), Mr. Darmanin explained that “30,000 to 40,000 supporters ended up at the Stade de France either without a ticket or with falsified tickets”. “70%” of the paper tickets presented for pre-screening were “fakes”, he said, and “after this pre-screening, more than 15%” were forgeries. According to him, at 9 p.m., when the match was initially scheduled to start, “97% of the Spanish supporters were present in their stands. But only 50% of the British supporters had returned to their stands.

And to denounce a “massive, industrial and organized fraud of counterfeit notes”. Mr. Darmanin announced to take legal action on this point. This report was received late Monday morning at the Bobigny prosecutor’s office and should give rise “during the day” to the designation of an investigation service.

The Minister also indicated that “2,700 tickets had not” been activated out of the 79,000 sold. He said he was “sorry” for the spectators with tickets who were unable to attend the game and expressed his “regrets” for the spectators who suffered from the use of tear gas used by law enforcement. . The sports minister added that there would be “compensation” for ticket holders.

Darmanin will be heard on Wednesday by the Senate

Separately, Darmanin said the decision to play the game at the Stade de France was “taken three months ago” – the final was originally scheduled to be played in Saint Petersburg. But “it normally takes between twelve and eighteen months to organize a match of this magnitude,” he said. Mr. Darmanin then “thanked all the police who, by their calm, avoided a tragedy”.

Gérald Darmanin estimated on Monday that “without the decisions taken by the police and the prefect, there would have been deaths” on Saturday evening during the Champions League final at the Stade de France. He then gave “all his support” to the prefect of police Didier Lallement, whose methods of maintaining order have been the subject of much criticism.

Following these incidents, the Minister of the Interior will be heard by the Senate on Wednesday, Le Monde has learned. The Minister of Sports, Amélie Oudéa-Castéra should also be “as soon as possible”, as indicated by Senator Les Républicains Michel Savin, president of the study group on sports practices and major sporting events. upper house internationals, at Public Senate and on Twitter.

For his part, the British minister said he was “extremely disappointed” by the treatment inflicted on the English supporters of Liverpool. “The fans deserve to know what happened,” added a spokesman for Boris Johnson, urging UEFA to “work closely with the French authorities in a full investigation” and publish the findings.

Fifteen police custody were still in progress Monday morning in connection with the chaos Saturday evening around the Stade de France, the Bobigny prosecution told Agence France-Presse. In this competent jurisdiction for Seine-Saint-Denis, where the Stade de France is located, forty-eight police custody were launched in total for troubles on the sidelines of the match which saw Real Madrid triumph over Liverpool (1- 0).

The majority of police custody, of which a “significant number (…) concerned minors”, were lifted over the weekend. But “fifteen police custody of adults have been extended, for public action decisions to be taken during the day”, reported the Bobigny prosecutor’s office at midday on Monday.

“There have been a large number of complaints against X for theft, snatching, even violence,” he said, but “no police custody has taken place for facts related to trespassing or forged match tickets”.