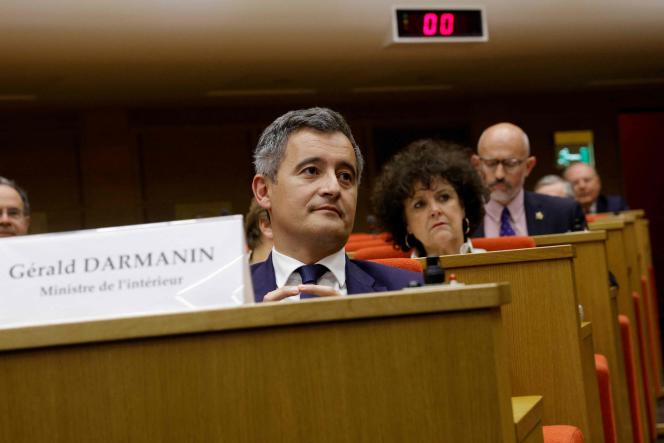 Hearing, Wednesday, June 1, by the Senate Law Commission, the Minister of the Interior, Gérald Darmanin, acknowledged that it was “obvious that things could have been better organized”, while many incidents have marred the Champions League final on Saturday at the Stade de France.

“It’s obvious that this sports party has been ruined,” he added. “And we very sincerely regret the sometimes unacceptable excesses that have taken place,” said the minister, under fire from critics after his statements on the number of counterfeit banknotes.

“This is the event that has mobilized the most police and gendarmes since I became interior minister,” said Mr. Darmanin, rejecting any criticism of the number of police present.

“Several tickets were duplicated hundreds of times,” he also said, citing the case of a ticket duplicated “744 times.” The Minister of the Interior reaffirmed that “110,000 people” showed up “in and around the Stade de France”, or “35,000” more than the planned gauge, corresponding, according to him, to supporters with tickets falsified or without a ticket.

Gérald Darmanin and the Minister of Sports, Amélie Oudéa-Castéra, have incriminated British supporters since Saturday evening, believing that they are largely responsible for the incidents, with a “massive, industrial and organized fraud of counterfeit tickets”, a much criticized argument , in England as in France.

This situation has, according to the authorities, led near the Stade de France to massive congestion, overflows and the intervention of the police. In this regard, Gérald Darmanin “sincerely apologized” to Liverpool supporters for “the great damage, especially to children” caused by tear gas, used “disproportionately”, ensuring that “sanctions will be taken “.

Sanctions requested from the prefect of police

“British and Spanish citizens will be able to lodge a complaint in their country from Monday” and they can also seize the General Inspectorate of the National Police (IGPN), said Mr. Darmanin.

“I personally saw two facts, where clearly (…) the use of tear gas was contrary to the rules of use”, he said again, specifying that he had “asked for sanctions from the prefect of police for these two law enforcement officials”.

Gérald Darmanin also announced that he had asked the interministerial delegate for the Olympic Games (JO), Michel Cadot, to consider “different rules” than that of dispersal with tear gas in the event of “exceptional sporting events”, believing that these means were not “adequate”.