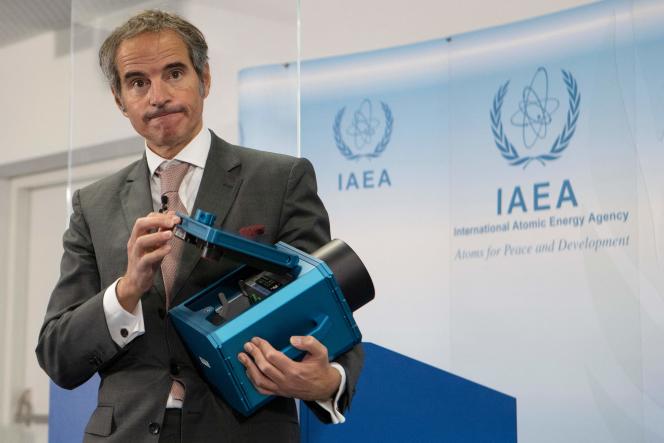 The International Atomic Energy Agency (IAEA) on Thursday (June 9) denounced Iran’s decision to remove 27 surveillance cameras from its nuclear activities, fearing that the move could deal a “fatal blow” to the Iranian nuclear talks. in Vienna. Iran has informed the IAEA of the withdrawal of 27 cameras in response to the adoption of a resolution criticizing Tehran, the UN body announced on Thursday. This measure “naturally poses a serious challenge to our ability to continue working there”, said its director general Rafael Grossi, during a press conference in Vienna. The IAEA verifies and monitors the implementation of the commitments made by Iran under the nuclear agreement concluded in 2015 in Vienna with the major powers.

Talks were launched a year ago in the Austrian capital to try to reintegrate the United States into this pact denounced in 2018 by former US President Donald Trump and to bring Iran back to full respect for its international commitments. regarding its nuclear program.

Berlin, London and Paris on Thursday night called on Iran “to end the nuclear escalation” and “to now urgently accept the deal on the table” since March, according to a joint statement.

“We condemn” Tehran’s decision, the three countries say in the statement sent by the German Foreign Ministry. “This escalates the situation and complicates our efforts to fully restore” the 2015 agreement.

Washington has also expressed concern over Tehran’s “provocations”, with US Foreign Minister Antony Blinken warning of “a deepening nuclear crisis” and “increased economic and political isolation of Iran”. Tehran announced on Wednesday that it had disconnected some cameras, without specifying the number, just before the vote in the IAEA Board of Governors on a resolution formally calling Iran to order for its lack of cooperation.

At issue is the lack of “technically credible” responses from Iran regarding traces of enriched uranium previously found at three sites that Tehran had not declared to have hosted nuclear activities. Condemning this text presented by the United States, the United Kingdom, France and Germany, Iran deplored a “political” and “not constructive” gesture.

The adoption of this text “will only weaken the process of cooperation” with the IAEA, warned the Iranian Ministry of Foreign Affairs. And diplomatic spokesman Saeed Khatibzadeh defended his country’s “peaceful nuclear program,” the “most transparent in the world.”

In addition to disabling the cameras, Iran has informed the IAEA of the installation of two new cascades of advanced centrifuges on the Natanz site (center), thus significantly strengthening its uranium enrichment capacity. The IAEA can continue inspections and still has 40 cameras on site, but this move by Tehran results in “less transparency, more doubts,” Grossi said. He called on Iran to resume dialogue once the “emotion subsided”.

“We will not back down”

Until now, Iran had been careful to avoid confrontation with the IAEA, but this time the ultra-conservative President Ebrahim Raisi showed his firmness. “We will not back down,” he said, according to the official Irna news agency. If the blockage persists, “in three or four weeks” the IAEA will no longer be able to provide the information necessary to monitor Iran’s nuclear program, said Mr. Grossi.

According to him, this would “deal a fatal blow” to the 2015 agreement providing for the limitation of Iranian nuclear activities in exchange for an easing of international sanctions, moribund since the withdrawal in 2018 of the United States which reimposed punitive measures on Iran. Tehran. A year later, Iran began to go back on its commitments, taking unprecedented steps over the months, while denying that it wanted to acquire the atomic bomb.

These new developments “will certainly increase the pressure on the negotiations to push for a decision one way or the other”, commented for AFP Eric Brewer, of the American research institute Nuclear Threat Initiative (NTI).

In an Iran suffocated by economic sanctions, passers-by interviewed by AFP called on the authorities to “cooperate with the IAEA”.

We must act “so that the problems do not worsen further and that the people live in peace and prosperity”, confided Ebrahim Ahmadpour, 60, in the capital.

National Rally: anchored in the north, the party dreams of constituencies in the four corners of France after the legislative elections of 2022

News Editor - June 10, 2022 0
This photo is one of the few images from my childhood that have come down to me because our apartment burned down when I...

Capitol Assault: ‘Donald Trump was at the center of this conspiracy’,...

National Rally: anchored in the north, the party dreams of constituencies...