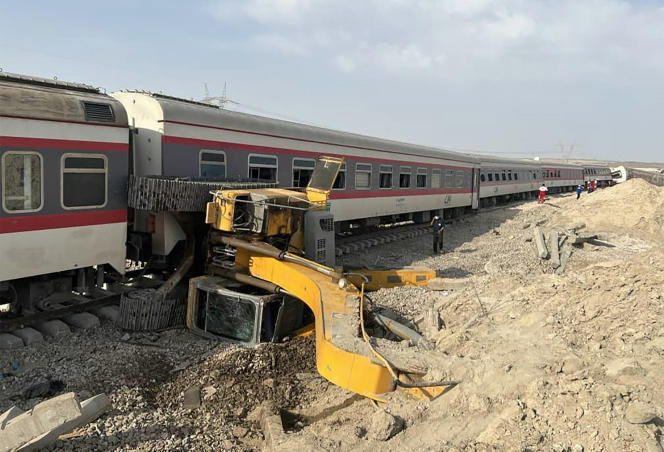 At least 17 people were killed and dozens more injured on Wednesday (June 8) when a train derailed after hitting an excavator near Tabas in central Iran, according to state media. “Seventeen people were killed and 37 others injured were transferred to hospital. The death toll is expected to rise as several injured are in critical condition,” National Rescue Service spokesman Mojtaba Khaledi was quoted by state television as saying. An initial assessment reported ten dead.

Photos released by the ISNA news agency show a wagon overturned on the track and four others embedded in each other. Rescue operations manager Mehdi Valipour said five of the train’s eleven carriages derailed. According to images from the Iribnews channel, the accident occurred in a desert area. The tragedy occurred on the line between the cities of Mashhad and Yazd.

“The train, which was carrying 348 passengers, derailed after hitting an excavator” which was near the tracks, Mir Hassan Moussavi, deputy head of Islamic Republic Railways, told state television. The accident happened at 5:30 a.m. local time (3 a.m. French time), according to state television.

This disaster, one of the deadliest in years in Iran, has led to a series of demonstrations across the country in solidarity with the families of the victims and against the authorities, accused of corruption and incompetence. Nightly protests took place in Abadan and other cities, especially in the center of the country, to mourn the victims and demand the prosecution of those responsible.

Justice had claimed to have arrested thirteen people, including the mayor of Abadan and two former mayors, accused of being “responsible” for the tragedy. In 2016, 44 people were killed when two trains collided and caught fire in northern Iran. Dozens of others were injured.