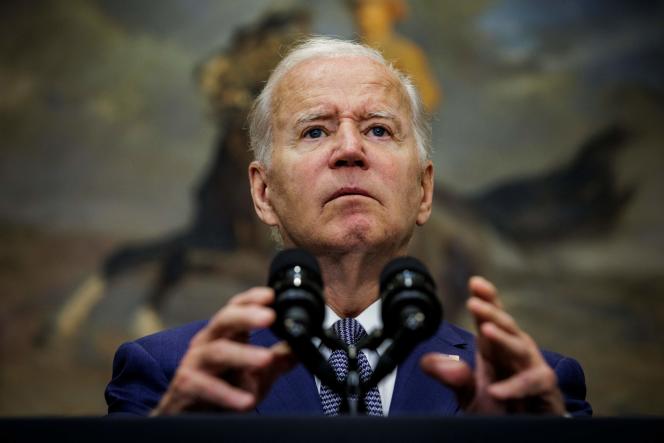 A 10-year-old girl lives in Ohio, a state where no abortion beyond six weeks is allowed. So says the law, which went into effect immediately after the US Supreme Court ruled on June 24 stripping women of their constitutional right to have an abortion. This 10-year-old girl was raped. She got pregnant. For a few days, it exceeded the allowed time. It was therefore necessary to drive her to Indiana to proceed to the voluntary termination of pregnancy (IVG). “I can’t imagine anything more extreme than that,” Joe Biden said Friday, July 8, as he signed a symbolic executive order, aimed at defending reproductive rights.

Aware of the frustration and anger reigning in the Democratic ranks, the American president insisted on this striking example to espouse these feelings instead of being the secondary target. “We cannot allow a Supreme Court, working in conjunction with extremist elements of the Republican Party, to take away freedoms and our personal autonomy,” he said. The choice we face as a nation is between the mainstream and the extreme. Between going forward or backward. »

But his intervention did not remove the discomfort. The White House seemed taken aback by the Supreme Court, when a draft of the decision had leaked two months earlier, leaving little doubt about the direction chosen.

Since then, the administration has been content with a magisterium of outrage, due to well-identified political limitations in the Senate. In the absence of a super-majority (60 votes out of 100), it is impossible to enshrine the right to abortion in law. And to lift this requirement to gather a super-majority, it would still be necessary for the fifty Democratic senators to accept; two are missing.

The administration also rejected the suggestion of a state of public health emergency, called for by some organizations for the defense of reproductive rights. Argument retained: such a declaration would unlock neither decisive prerogatives nor substantial means. Similarly, the White House has not taken up the idea of ​​organizing abortion care on federal land – such as military bases – located in the most repressive states. This would have had very complex ramifications in terms of criminal liability for the participants.

Therefore, “the fastest path available”, according to Joe Biden, is a broad mobilization during the midterm elections in November. “I hope and strongly believe that women will come forward in record numbers to reclaim the rights that have been taken away from them by the Court,” he added, stressing the absolute urgency in the face of the reactionary wave in republican states. A fierce legal battle is underway across the country to challenge the application of “trigger laws”, ready-made legislation that was only waiting for the Supreme Court’s decision to come into force.

In Louisiana, for example, a judge had suspended the application of this ban, allowing the last three clinics in the state to resume their activities, before another magistrate returned to appeal on this decision on Friday.

In nine states, the complete ban is already in effect: Alabama, Arizona, Arkansas, Mississippi, Missouri, Oklahoma, South Dakota, Texas and West Virginia. In total, experts estimate at twenty-five the final number of states that should completely ban abortion within a few months.

An era of suspicion and stalking is looming

Women’s rights organizations and their lawyers are therefore looking into all possible circumvention strategies, without exposing themselves to prosecution. One of the big questions concerns the possible direct criminalization of a person having recourse to an abortion. An era of suspicion and stalking is looming. By leaving it up to the states to decide, the Supreme Court introduced medical and penal insecurity and broke the principle of equality in matters of reproductive health. But Washington can hardly guard against it.

The order of Joe Biden’s speech on Friday revealed just how narrow his reliance on an executive order was. He first criticized the decision of the Supreme Court then launched a call to the polls, before, finally, addressing the content of the text. This aims to expand access to reproductive medicine, contraception, the morning after pill, and to better protect the confidentiality of personal data held by clinics, doctors and especially women themselves, via the geolocation applications or those for monitoring the menstrual cycle. The Department of Health and Social Services will have to present its proposals on all these points within a month.

The decree also aims to protect freedom of movement from one state to another, as well as access to abortion pills, available after consultation with a doctor by simple mailing. However, several states have already launched the hunt for these pills, which allow abortions to be carried out at home.