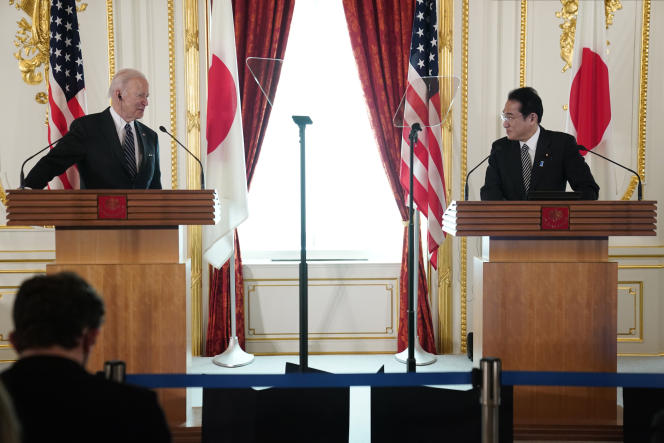 “We agreed with the one China policy, we signed it (…) but the idea that [Taiwan] can be taken by force is simply not appropriate. »

The US President then reiterated that Russia should “pay a long-term price” for its “barbarism in Ukraine”. “It’s not just about Ukraine,” Biden said. For if “sanctions were not upheld in many respects, then what signal would that send to China about the cost of attempting to take Taiwan by force?” he wondered.

A new economic partnership in Asia-Pacific

Japan and the United States “will monitor the recent activities of the Chinese Navy, as well as movements related to joint exercises by China and Russia,” said Japanese Prime Minister Fumio Kishida. after his meeting with the American president.

“We strongly oppose attempts to change the status quo by force in the East China Sea and the South China Sea,” Kishida said at a press conference. “In addition, we have agreed to deal with various China-related issues together, including human rights,” he added.

Mr. Biden also announced the launch of a new economic partnership in Asia-Pacific with 13 first participating countries, including the United States and Japan, but not China, which sees this project with a dim view.

The Indo-Pacific Economic Framework (IPEF) is not a free trade agreement, but provides for further integration between its member countries in four key areas: digital economy, supply chains, green energy and anti-corruption. The American president, however, made it known that he was considering lifting tariff barriers for China, recalling that they had not been imposed by his administration.