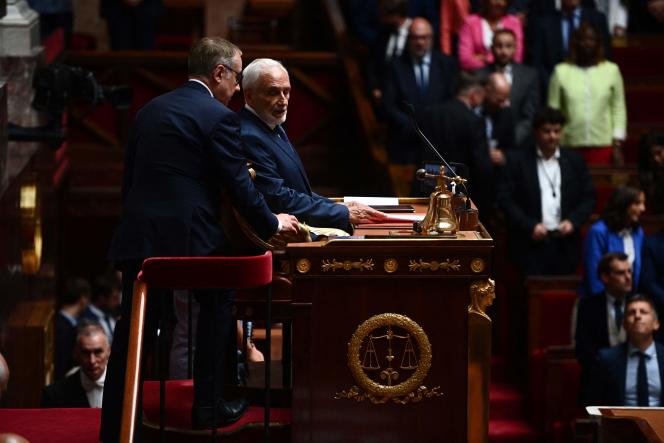 Suddenly, José Gonzalez stops. “Excuse me, I’m thinking of my friends left over there…” Emotion strangles the deputy National Rally (RN) of Bouches-du-Rhône, at the Palais-Bourbon tribune, Tuesday, June 28. At the age of 79, the dean opens the inaugural session of the 16th legislature by bringing a scent of nostalgia for French Algeria and the returnees of 1962 over the Chamber. A time that the four youngest deputies appointed session secretaries cannot not know. “I left part of my France there. I am a man who saw his soul forever bruised by the feeling of abandonment”, insists the pied-noir born in Oran, who says he is “torn from his native land by the wind of history”. A majority of deputies applaud him as a sign of encouragement.

Marine Le Pen reread the speech and gave her green light. The president of the group of 89 RN deputies taps her desk in a discreet gesture of nervousness. She listens to this activist, who has held his National Front (FN, the former name of the RN) card since she celebrated her 10th birthday in 1978, twice praise “French unity”. An allusion interpreted in nationalist circles as a nod to the original name of the FN in 1972, the National Front for French Unity.

After congratulating all of his colleagues on their election, José Gonzalez greeted the “venerable parliamentarian” Edouard Frédéric-Dupont, supporter of the far-right leagues in 1934, then defender of French Algeria. Close to Jean-Marie Le Pen, this deputy elected on the National Front list was himself dean, in 1986, of an Assembly where the group of 35 far-right deputies sat, including former members of the OAS.

Under a consensual air, José Gonzalez hailed a “Profoundly renewed Assembly”, despite “the brutality of a voting system which sometimes gave some French people the bitter feeling of not being represented enough”. This configuration has resulted, he said, in a “national representation called to take a more central place”. Reference to the rebalancing of institutions, but also to the notion of “central people” exalted by Marine Le Pen.

Later, in the Salle des Quatre-Colonnes, the elected representative of Allauch insisted to the press: “Come with me to Algeria, I will find you many Algerians who will say to you: ‘when will you come back, the French?” Before adding: “I am not here to judge whether the OAS has committed crimes or not. What to scandalize, from the left to La République en Marche… and to touch the patriarch of the far right. Jean-Marie Le Pen called him to congratulate him and invite him next week to pin the golden flame, the highest honorary title of the Lepenist party, very close to his tricolor scarf.