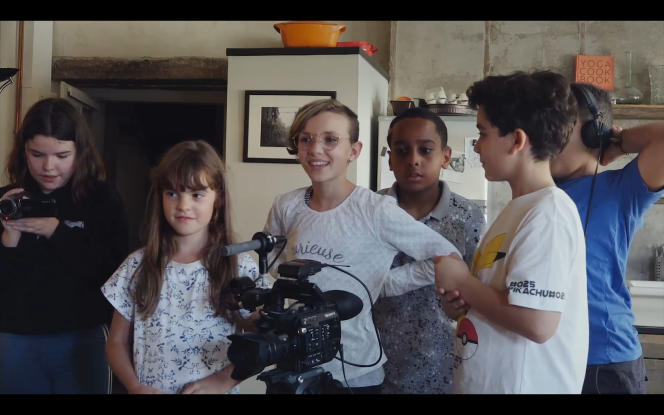 “My dad says a couple is an equation with two unknowns. Ah, the words of children… Often funny, but not always: “Is it hard to get a divorce?” “; ” Why are you gone ? »

For the needs of a play for young people which was offered to him in 2019, La Dispute, Mohamed El Khatib, 42-year-old playwright and director, went to elementary schools to collect the testimonies of a hundred children. who have experienced separation from their parents. Like him when he was 8 years old.

From this raw material, the author has kept the filmed encounters with sixteen of them – Eloria, Solal, Amélie, Aaron, Camille, Maëlla, Imran, Ihsen, Ninon, Malik, Abel and Abel, Jeanette, Brune, Swann and Anne. He grouped them as one prepares a presentation with his students, by themes, written in chalk on an imaginary board: “The disputes”, “The announcement”, “The alternation”, “The in-laws”… Until to children’s “advice” to their parents – from “Don’t give up, it happens…” to “None!” Let them manage.” This makes for a gripping, very moving and sometimes funny documentary.

The approach is obviously not to make the parents feel guilty. We can certainly be surprised when we learn that a couple has chosen, to announce their separation to their daughter, to do the trick: “We have good news and we have bad news, which one do you choose? Others try to hide the truth. But children are rarely fooled: if there are arguments or if the father sleeps on the sofa and the mother in the room, they suspect that something is wrong.

Afterwards, the interpretations vary according to the nature of each one. There is the optimist: “It was friendly arguments, like Asterix and Obelix: in the end, they always reconcile. The budding psychoanalyst, who repeats what she has heard: “It’s always my mother who holds incomprehensible diagrams. Others don’t want to believe it: “My parents aren’t separated, dad is just on a business trip.” “In the background, the viewer finds that there is no longer a barrier between the privacy of parents and their children.

Aïsha and Ihsen are two special cases since they do not know the father. The director went to Ihsen to interview his mother. When she mentions her physical resemblance to her father, which sometimes leads her to hate her son, Ihsen takes it: he just wants to ask his father why he didn’t love him, why he isn’t here.

Interspersed between the interviews are a few excerpts from the play at Espace Cardin, taken against the backdrop of multicolored Lego and giant Playmobil. The audience laughs out loud. Back to the movie. Put in confidence, some kids offer to take the camera themselves to question their parents. The question to Eloria’s mother is straightforward: “Who left who?” But she wants to answer, even if it’s difficult. While parents generally think that their children are not angry with them, she finds it great that Mohamed El Khatib is directing this play and this film. Because for the first time someone is looking positively at what their daughter Eloria has been through.

News Editor - May 19, 2022 0
The case is turning into a headache for the American administration. President Joe Biden announced new measures on Wednesday May 18 to try to...