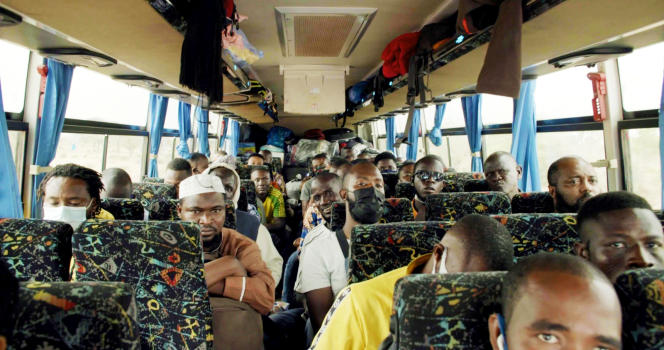 It is a journey, a quest, a road movie that starts from a bus station in Lagos, Nigeria, and ends on the shores of the Mediterranean, in Tangier (Morocco). Nigerian director Ike Nnaebue returns to the road he took in 1997, when he left his country in search of a better life. At 18, he left with “an atlas, a few hundred dollars, and a backpack full of dreams and enthusiasm.”

This time, Ike Nnaebue gives voice to West Africans who migrate across the continent with the aim of reaching Europe, via Gibraltar. He wants to understand “their challenges, their hopes, their choices.” From Nigeria, it goes north by bus, passing through Benin, Togo, Burkina Faso, Mali, Mauritania and, finally, Morocco. “By telling their story, it’s kind of my own that I bring to life,” he says in this intimate documentary.

Along the way, in the dust of the stations and the promiscuity of the buses, he meets a multitude of characters. Migrants who have not had the courage or the strength to continue their journey. Others who, without their knowledge, will feed networks of domestic or sexual slavery. Finally, there are all the “galley slaves” of the road, who think they can reach their dream on the other side of each border.

“Dreaming in your own country”

The documentary is broadcast as part of Arte’s “Generation Africa” ​​collection, bringing together twenty-five films made by filmmakers from sixteen African countries, to weave stories around migration and the dreams of youth. . The continent as its inhabitants experience it, that of noisy parking lots, crowded transport, poorly lit “maquis” (bars), kebab vendors and endless waits.

Along the way, the director wonders: “What do we have to do so that every African starts dreaming in his own country? “; “Why is it so difficult to dream of a comfortable life on a continent with such abundant resources? »

The stopover in Bamako (Mali) takes on a special dimension for the director, author of several successful films for Nollywood, the Nigerian film industry. During his first trip, it was in the Malian capital that a trader warned him of the many dangers (human trafficking, theft, etc.) that awaited him if he continued on his way north. Worried and anxious to find an English-speaking country, Ike Nnaebue will then branch off to Gambia, where he will embark on the cinema, before returning to Nigeria to pursue his career there.

“For all migrants, the idea of ​​returning without having succeeded is unthinkable,” he recalls. The film shows that the dream of some migrants can continue on their continent of origin. History proves that Africa has something to offer.