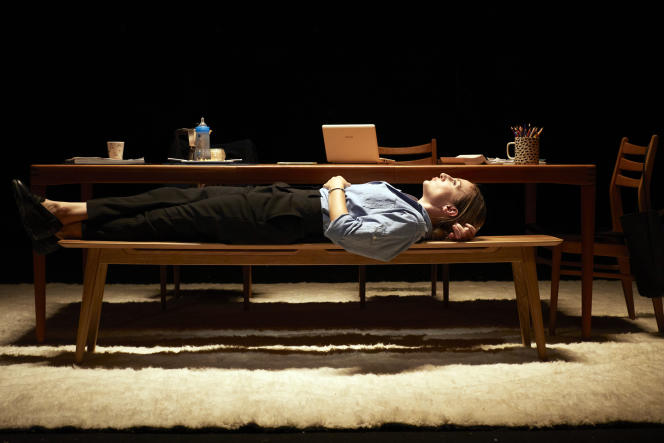 Since becoming a mother, Camille Chamoux discovered the timer. A good way to explain to your children that when it rings, it’s time to put the toys down and go to school. From this seemingly innocuous personal experience, the comedian-comedian drew a philosophy of life: stop obsessing over the stopwatch to favor the wisdom of the timer.

Having trouble keeping up? It’s simple: instead of running to try to catch up, we might as well enjoy what we have left. Simply titled Le Temps de vivre, Camille Chamoux’s show has the effect of laughter therapy to confront an era of technology that is as innovative as it is depressing.

On the bare set of the Petit6Saint-Martin theater in Paris, in the fall of 2020, the actress welcomed the public as if she were receiving them at home. Six years after the formidable Born under Giscard – where she invited us to her young girl’s room to make fun of her “inert generation” adept at vintage -, we find her this time around a large dining room table.

We rediscover his gift to take us by the hand and tell, with communicative energy, that life cannot become either a juxtaposition of WhatsApp groups or a Waze countdown and that we must trust the unexpected.

Keeping the taste for sociological comedy to one character, addressing spectators as friends, the comedian summons Marcel Proust, Epicure and Léo Ferré to convince himself that it is “never too late for anything” provided that we know how to take the time. She still manages to mix intimate experiences and views on our time, to play back and forth between generations, by wielding self-mockery wonderfully.

Wisely styled and classically dressed, she will, during her quest to reconcile with the passage of time, let off steam and send everything packing: her depressed girlfriend, her mobile phone and the generation of boomers who think they are still young and never let go. nothing. Untying her hair, removing her corseted shirt, she turns into a feminist forty-something, feasting, with hilarious ardour, on reading a text by Virginie Despentes.

A hymn to de-dramatization, a eulogy to optimism despite everything, this carefully written one-woman show may seem a tad candid. But he is saved by the sincerity of the game and a desire to let go which, for the spectator, takes on consoling virtues.

Camille Chamoux’s questions become ours, and her humor acts as a balm. Add to that a staging by Vincent Dedienne, who knew how to slip his melancholy touch and add a theatrical dimension to the story, and you get a sparkling and salutary one-woman-show.