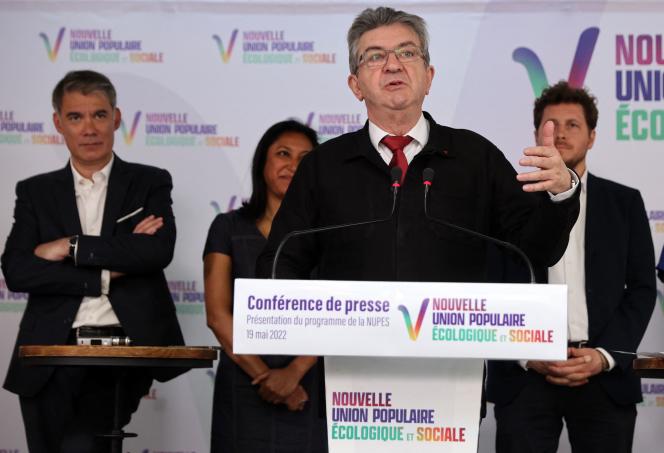 Fifteen days after announcing an alliance agreement with part of the left in the run-up to the legislative elections, the New Popular Ecological and Social Union (Nupes) presented, Thursday, May 19, a programmatic base comprising more than 650 proposals.

The points of rapprochement as well as the disagreements between La France insoumise (LFI), the Socialist Party (PS), Europe Ecologie-Les Verts (EELV) and the French Communist Party (PCF) are listed there. “The idea was not to achieve an ideological fusion”, noted Jean-Luc Mélenchon from the start of the press conference, in which the ecologist Julien Bayou, the socialist Olivier Faure and the communist Ian Brossat. Even on Europe, “it was easy to agree”, he added, “since no one was asked to impose their own vision on everyone else”.

“We are for the idea of ​​moving the European Union”

The ambition to “plan the transition to 100% renewable energies and the exit from nuclear power” and to “abandon EPR projects” are included in the program, published simultaneously on the Nupes website. “We agree on the essentials,” Mr. Brossat insisted, despite his camp’s clear support for the nuclear industry. “If tomorrow we have [parliamentary] groups in the National Assembly, they will defend their convictions,” he added. Understand: Communists will keep their autonomy of decision. This divergence of positions on the energy strategy is a “nuance” compared to the main axes of the program, also commented Clémence Guetté, executive of LFI and candidate for the legislative elections in Val-de-Marne.

The parties also highlighted their common desire to reform the European Union (EU), on which the opposition between the PS and the other parties was very firm during the presidential campaign. “We are for the idea of ​​moving the European Union,” said Faure, while insisting on the need to remain in the EU and the euro zone.

“We are ready and ready to govern for climate and social justice from June,” Mr. Bayou also said, setting these two themes as the heart of the Nupes project. “We will campaign all over France to create the conditions for a better future. We have the will, together, to be a left of transformation”, analyzed for his part Mr. Faure, adding: “The history of the left is to have made possible things which were presented as impossible the day before. »