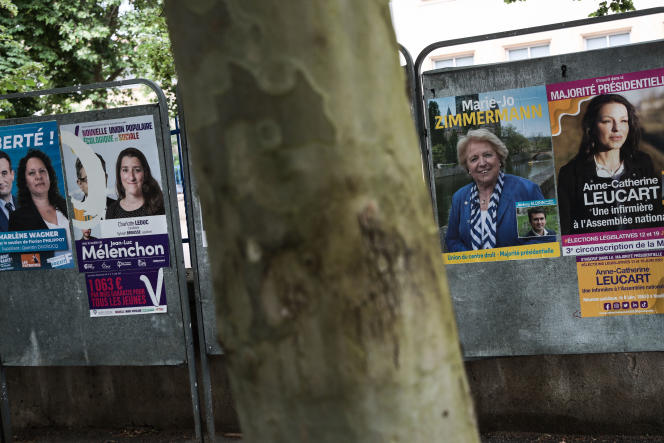 After those of a good part of the overseas territories on Saturday, French citizens of mainland France are expected, Sunday, June 12, from 8 a.m., in the polling stations for the first round of the legislative elections.

Nearly 6,300 candidates are running for the 577 seats in the National Assembly, i.e. 20% less than in 2017, due in particular to the agreement on the left. Those who will not be elected on Sunday evening will have to, to access the second round of June 19, either arrive in the first two in their constituency, or obtain the votes of 12.5% ​​of registered voters.

The dreaded massive abstention could arbitrate the proxy match between the head of state, Emmanuel Macron, and the third presidential man, Jean-Luc Mélenchon, now leader of the left. Together!, a macronist coalition bringing together La République en Marche (LRM), Horizons and the MoDem, appears to be threatened by the left-wing alliance Nupes (New Popular, Ecological and Social Union) – which brings together La France insoumise (LFI), the Socialist Party (PS), the Communist Party (PCF) and Europe Ecologie-Les Verts (EELV). While on the far right, Marine Le Pen’s National Rally (RN) has measured ambitions.

Abstention in the legislative elections has only increased since the 1993 election, rising from 31% that year to 51.3% in 2017. It primarily affects young people and the working classes.

Fifteen members of the candidate government

If Emmanuel Macron only obtained a relative majority, he would be forced to deal with the other parliamentary groups to have his laws approved. The situation already occurred in 1988, after the re-election of François Mitterrand. Its Prime Minister, Michel Rocard, had then had to compose, laboriously, ephemeral majorities for each project. He had also often resorted to article 49-3 of the Constitution, a process allowing the adoption without a vote of a text of law, the use of which has since been restricted.

If, on the contrary, the Nupes of Jean-Luc Mélenchon won an absolute majority, Emmanuel Macron would be deprived of practically all his powers.

“It is no longer he who will determine the policy of the nation, but the majority in the National Assembly and the Prime Minister who will come from it”, summarizes Dominique Rousseau, professor of constitutional law at the University Panthéon-Sorbonne. It is with this objective in mind that Jean-Luc Mélenchon kept repeating that he wanted to make these legislative elections “a third round” which would allow him to be “elected Prime Minister”.

Including the Prime Minister, Elisabeth Borne, fifteen members of the government are in the running for the legislative elections and will have to leave the executive in the event of defeat, in accordance with an unwritten rule but already applied in 2017 by Emmanuel Macron.

After Marine Le Pen garnered more than 41% of the votes in the second round of the presidential election, the National Rally fears being left behind by Nupes and Together! during the legislative. However, he hopes to obtain between 20 and 40 deputies, against eight elected in 2017, and thus to form a parliamentary group for the first time since 1986.

Presidential candidate Eric Zemmour (Reconquest!) harbors the hope of being elected deputy in the Var.

Finally, these legislative elections promise to be at very high risk for the traditional right of the Republicans (LR), a pillar for decades of French political life but far from power since 2012, and whose candidate, Valérie Pécresse, obtained less than 5 % of presidential votes.