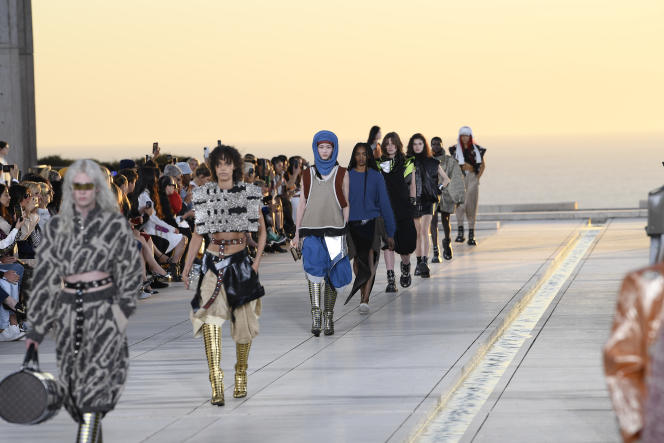 Here we go again. If the Covid-19 has partially paused the fashion calendar by forcing brands to cancel their shows or to film them without an audience, this spring 2022 marks a return to the world before. The months of May and June are once again synonymous with cruise fashion shows organized in exotic and/or very Instagrammable destinations. After Chanel, which took over Monaco on May 5, it’s Louis Vuitton’s turn to demonstrate its power through an exceptional Cruise 2023 show organized on May 12 at the Salk Institute for Biological Studies in San Diego (California). ).

The locomotive of LVMH brought together 654 guests (including about a third of customers) at the upscale seaside resort of La Jolla to introduce them to a scientific research institute not accessible to the general public. The Salk Institute, which employs several hundred researchers, specializes in research in biomedicine and neuroscience; congenital diseases, Alzheimer’s, Parkinson’s or cancer are part of its fields of investigation. Beyond its scientific virtues, the institute is an architectural masterpiece erected in 1965 by Louis Kahn: two elegant concrete blocks face each other around a water garden and frame a view overlooking the Pacific where you can watch the sunset.

The show was scheduled for 7:10 p.m. local time so that the clothes – which were thought of as a dialogue with the place – would benefit from the falling evening light. The tone is set with the arrival of the first silhouettes, which stand out in the distance in the twilight fire of the Pacific: dresses as voluminous as those worn at the court of the Sun King nearly four centuries ago, in a thick metallic jacquard and fluid like a lava flow. The artistic director Nicolas Ghesquière uses an extraordinary space to deepen his stylistic research in this collection where each garment breaks free from standards.

A metal tube winds over a shimmering balloon dress. From a rigid bolero in bright colors inspired by a jet ski, a section of greige wool escapes and wraps around the legs like a draped skirt. A harness in shiny scales protects the chest and shoulders, but leaves the belly bare, strapped only with a belt stripped of all functionality since it is tied directly on the skin. The latest silhouettes are like UFOs, with their XXL bolero that extends well beyond the shoulders and from which cascades of lurex threads escape. In this phantasmagorical wardrobe, we see warriors, fantastic heroines, ancient goddesses, amazons. In addition to the models, several Olympic champions such as skier Eileen Gu and athlete Dalilah Muhammad walked the podium.

At Louis Vuitton, revenue is mainly based on leather goods driven by the strength of its logo. Women’s ready-to-wear has more of a role as a creative laboratory responsible for establishing the fashion legitimacy of the trunk maker. Since his arrival in the house in 2013, Nicolas Ghesquière has been working on it successfully, with more or less experimental collections. Even if this time he mixes his usual ingredients again – clothes with new shapes confronting universes that are a priori incompatible in a grandiose architectural setting -, he still moves away a little more from a rational and commercial fashion.

By positioning his work as an art rather than a business, he makes the cruise show more legitimate: if it is an artistic gesture and not an order book, it seems more normal than several hundred people make the trip for such an event, as they would for a concert. “It’s up to me to place the cursor on creativity,” explained Nicolas Ghesquière a few hours before the show. I tell myself that if I want to go far, I will. And I think it’s all the more important in an industry that keeps growing, so much so that it sometimes makes you dizzy. Like what, creating fantastic clothes does not prevent you from having your feet on the ground.