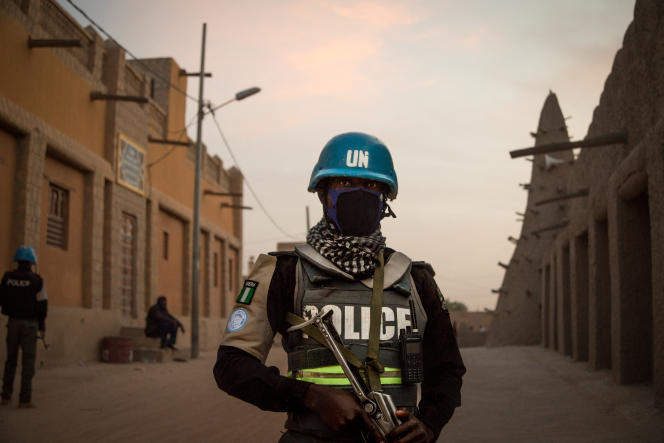 The authorities of Mali have suspended from Thursday, July 14, all rotations of military and police contingents of the United Nations Mission in Mali (Minusma), including those already scheduled or announced, said the Ministry of Foreign Affairs in a statement. .

This decision applies until “the organization of a meeting” by the Malian side, the date of which has not been communicated, to “facilitate the coordination and regulation” of the rotation of these contingents, adds the communicated. The Malian authorities justify their decision by invoking the “national security context”.

The Malian authorities justify their decision, which concerns the 12,261 soldiers and 1,718 police officers deployed in Mali by some fifty contributing countries, by invoking the “national security context”.

This measure comes four days after the arrest of 49 Ivorian soldiers, “mercenaries” according to Bamako, who accuse them of having the “disastrous purpose” of “breaking the dynamics of refoundation” of the Malian state.

According to Abidjan, they were deployed in Mali as national support elements (ENS), a UN procedure allowing peacekeeping mission contingents to call on external service providers for logistical support. Bamako assures the Minusma to work “diligently in order to create the conditions conducive to the lifting of this suspensive measure”, declares the press release.

Obstruction of freedom of movement

It is a new diplomatic hitch in relations between Mali and the Minusma, present in Mali since 2013, which has just had its mandate renewed for one year on June 29. This renewal was accompanied by Mali’s “firm opposition” to the freedom of movement of peacekeepers for investigations related to human rights.

Its ambassador to the UN Issa Konfourou had notably declared that Bamako “does not intend to execute” the provisions of the mandate related to the free movement of blue helmets for investigations without prior green light. “The movements of the Minusma (can) be done only with the agreement of the authorities” Malian, he had said.

This restriction on freedom of movement, formalized at the end of June, actually dates back to January, according to diplomats, a period which coincided with the deployment in Mali of paramilitaries from the private Russian company Wagner.

In mid-January, Mali had suspended Minusma air operations for a few days following, according to her, a reorganization by the Malian authorities of the process for approving flights over the territory in conflict. “Fruitful discussions” led to the lifting of this suspension.

In addition to its operations in the Malian sky, the Minusma constantly flies between the sub-region and Mali, in particular to supply its peacekeepers, evacuate its wounded, and as part of contingent rotations.

On July 7, the head of Minusma El-Ghassim Wane said in a press conference that the mission needed the “support and (of) the cooperation of the Malian authorities” calling for a “constant dialogue” to overcome “misunderstandings” .

This suspension comes in the context of a diplomatic standoff that has lasted for several months between Bamako and its partners: France, first, which Mali pushed towards the exit in early 2022 after nine years of military presence in the country, via Operation Serval then Barkhane. The last French soldiers must leave Mali within a few weeks.

Then with the Economic Community of West African States (ECOWAS), which for six months harshly sanctioned Mali because of the non-respect of its commitments, in particular on the sensitive question of the return of civilians to power. The economic and financial sanctions were finally lifted in early July after the presentation of an electoral timetable fixing the next presidential election in February 2024. Arm wrestling with Côte d’Ivoire, finally, since Sunday after the arrest of 49 soldiers in Bamako airport.

Mali was the scene of two military coups in August 2020 and May 2021. The political crisis goes hand in hand with a conflict that has steadily worsened since its beginnings in 2012. Jihadist violence has spread towards the center and then the south of Mali, and in neighboring Niger and Burkina Faso.