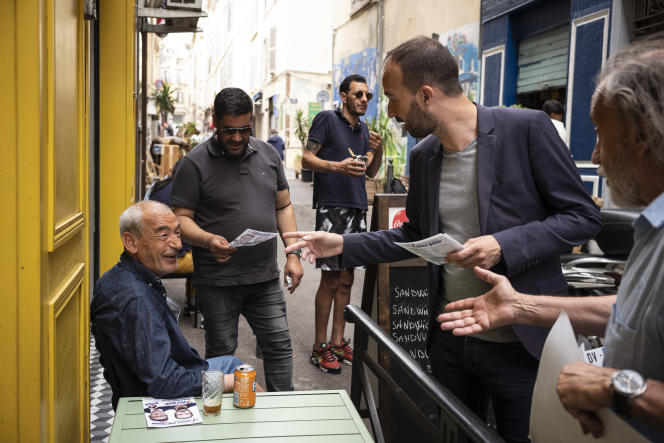 The Melenchonist bastion is on the way to remaining in the purse of La France insoumise (LFI). Manuel Bompard, the party’s candidate in Marseille, in the 4th constituency of Bouches-du-Rhône, came very far ahead in the first round of the legislative elections, Sunday June 12, with 56.04% of the vote. He will face in the second round Najat Akodad, of the presidential coalition Together!, which gathered 14.88% of the vote. It is the low participation which prevents a qualification from the first round of Mr. Bompard.

A former companion of Jean-Luc Mélenchon, this rather discreet 36-year-old Drôme resident became better known during the presidential campaign, when he scoured the morning shows to defend the program of the LFI candidate at the Elysée. Politically committed since 2004 against the first employment contract (CPE) and in 2005 against the European Constitutional Treaty (TCE), he joined the Left Party in 2008, then became the director of several electoral campaigns for Jean-Luc Mélenchon, including that of the 2022 presidential election. A disappointed candidate for the 2017 legislative elections in Haute-Garonne, he was elected European deputy (LFI) two years later.

It was with a tiny incise in his Marseille speech on May 12, in front of activists, that Jean-Luc Mélenchon, the outgoing deputy for the constituency, had announced outright that the task of succeeding him would fall to Manuel Bompard – present on the platform, the person concerned had not departed from his usual placidity.

Without ties in the Marseille city before the last few months, Mr. Bompard is parachuted, denounce his opponents, who had addressed the same criticism to a Jean-Luc Mélenchon all occupied with his national destiny. “We cannot count on a hologram of a deputy to solve the problems of this territory”, had judged with the World Najat Akodad, the candidate of the presidential majority in this constituency where a total of no less than fourteen candidates presented themselves.

Jean-Luc Mélenchon came out on top in the first round of the presidential election, with 54% of the vote, in this constituency of 60,000 voters which covers the first three districts of the city, where 39% of the population lives below the poverty line , with more mixed neighborhoods such as the Plaine or the Cours Julien. Pragmatic and strong in calculation – he is an engineer by training -, Mr. Bompard had declared that he wanted to campaign by mobilizing above all the electorate already convinced of La France insoumise.