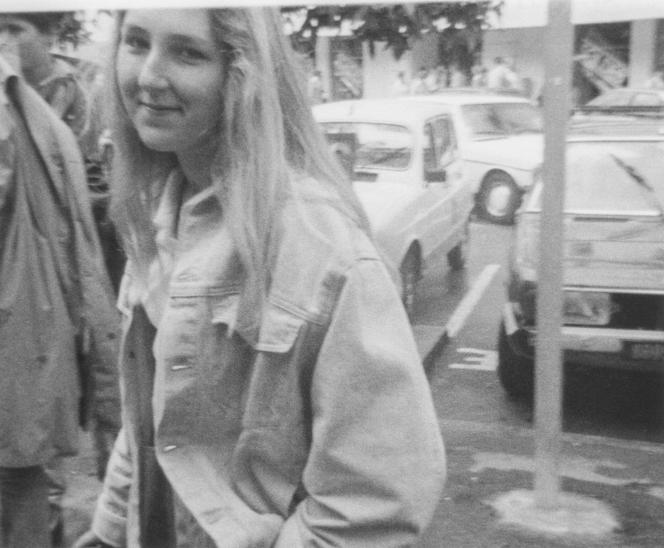 I am 14 years old in this photo, taken in Bayonne, in front of the college, by a classmate, Véronique Simon – her name is written on the back of the image. This denim jacket I’d picked up was one of the first pieces I felt less clumsy in, whereas so far it’s mostly been my mom who’s dressed me: kilts, itchy sweaters, underwear. sweaters… I lived in a village from which I dreamed of escaping. It was the time of an adolescence with a quality of colossal boredom, a viscous boredom. The circle of friends was small, and the quarrels and heartbreaks always seemed terrible.

Fortunately, the sea was three quarters of an hour by bike or twenty minutes by moped, like a getaway. I joined some surfer friends there. I listened to music that I recorded on cassettes: David Bowie, Duran Duran, Supertramp, Orchestral Maneuvers in the Dark whose names were pronounced with our Bayonne accent. And then of course The Cure, which I went to see in concert in Bordeaux, crepe hair, kohl eyes. I was also a fan of local rock bands – one of them was called Les Suppositoires! I read a lot of science fiction, Solaris by Stanislaw Lem or the novels of René Barjavel, like Le voyageur imprudent, which meant a lot to me.

During this period, between 1983 and 1986, I recorded about fifteen audio cassettes which served as my diary. In 2010, I got back into it. These are shameful hours of blah-blah: “Thing didn’t invite me to his party” and love as the main subject. But I found there the moving soundtrack of the house: the click of my mother’s heels on the floor tiles, the parakeets in the kitchen, the sheep in the meadow, the neighbour’s rooster… What was strong, it was the language. You hear me say new words – charismatic, narcissistic, mystical… – that I don’t know how to use yet. Or repeat pseudo-philosophical approximations that a boy had unpacked to me to amaze me.

At first, I was stern listening to myself again, so candid. Then I realized that I had enough distance to detect charm in it, and that was a starting point for Cleves. In this novel, I wanted to render an era and the language of that era. It was a time after sexual liberation and before AIDS, when we were ordered to go to bed far too young, when it was absolutely necessary to be a liberated woman, as Marie-Claire, whom my mother bought, told us to do.

Men, they had to dominate, to perform sexually. A respectful boy was not a real guy and myself, I was formatted to the point of being very in love with a boy who dominated me. His educational background was mixed, he was 18 and had a driving license – we often crossed the Spanish border to go clubbing.

Today, these 1980s, which for me have nothing enigmatic about them, fascinate my children. My son and my daughter are tearing off one of my jackets which is forty years old, with dolman sleeves. My daughter picked up my old Bowie tapes and slipped the cardboard cover of Let’s Dance into her smartphone case. When they are in my childhood home, they are amazed: “But there was no Internet? “Their adolescence, never far from TikTok, has nothing to do with mine. But it will perhaps be the subject of a novel. I’m thinking about it right now.